Jump the Shark much? 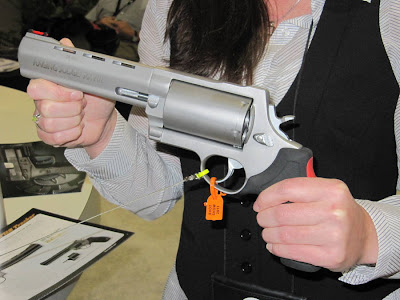 I've heard about this one for the last couple of days, but this is the first photo I've seen of it. I said it with the Taurus Judge, and I'll say it again with the S&W Governor and the Taurus Raging Judge: "WHY?" It serves absolutely no rationale purpose I can think of. Target shooting? Doubtful. Home defense? Maybe, but unlikely. Hunting? Hunting what exactly? Mutant, zombie squirrels? Collecting? You're joking, right? Paper weight? Aha!

Well, they are a hoot for shooting skeet...

Really? I never would have guessed. I hadn't ever heard mention of someone using one for that purpose.

while I would never be against owning something for pure entertainment value (since I do) the whole revolving shotgun/handgun thing leaves me with "meh" feelings. If I had large amounts of cash to waste on guns I can't say it would be at the top of the list, but I'd buy a six inch version to leave in my camp box.

The .410 from a defense aspect is in all honesty stupid. While I think you can make rational arguments that anything should be game in self-defense you can't rely on the court to be rational.

I wish they would just make a snub nosed .45 colt that could take .45 ACP.

Of course I also wish Smith & Wesson would stop focusing on 2 oz full sized handguns made from super martian metals that have some space tariff on them that makes them prohibitive in price. And instead use steel get rid of the HUD hole remember that their guns use to have some class to them.

Thank You (stepping off soap box muttering to himself about dumb guns, country gone to hell while trying to find his coffee mug)

They are loads of fun at the range. I think most who buy them do it 'because they can, and they enjoy them.' Some people like these, some don't. Kind of like why we don't all drive beige Camrys.

The Circuit Court Judge (long gun version of the Judge) has been so popular that they are going to some additional calibers of revolving long guns, including .22LR and 28 ga. To do the long gun in 28 ga, they have to build the frame, etc, so there is small cost to producing the pistol to see if anyone is interested. It certainly draws a lot of comment.