I woke up this morning to the headlines "Suicide blasts at Jakarta Ritz".

My second thought was of the attack on the Oberoi Hotel in Mumbai last year by members of Lashkar-e-Taiba . I had spent a few nights there in 2007.

But my first thoughts were of the Spring of 1998 and the Indonesian 1998 Revolution that centered around the resignation of President Suharto .

For two weeks in May that year, I was part of a small contingent of guys that were on 24 hour stand-by to do emergency evacuations for ten American paper mill executives on two Indonesian Islands.

The U.S. based company was trying to assess the particulars of getting their men out of the country in the most efficient manner (read: cost effective). If memory serves I think the cost thrown at the company to extract their men by us was $2-$2.5 Million dollars.

After day in and day out of green lights and red lights the operation was ultimately scrapped.

The Client said they felt like the situation was easing up in Indonesia and that their men in country should be able to get themselves home.

Six of those men did. Four did not. They were hacked up and/or executed on some jerk water island in the South China Sea. As I later found out the families of the left-for-dead were suing for tens of millions of dollars. I'm sure in retrospect that $2.5 looked cheap.

The fact of the matter is this. Regardless of where and why when the shit hits the fan its going to probably be up to you to get yourself (and anyone with you) home. Or at least out of the kill zone.

"Ridiculous" you say. "I'm in my hotel room right now in the Republic of Freeistan and can see the U.S. Embassy from my window. Its just over a mile away, and I ran a mile in seven minutes this morning on the hotel treadmill."

If rioting breaks out between you and the embassy getting there might be tough. If a civil war breaks out good luck. Especially if you're an American.

Regardless of what you think or who you are, right now in world history the U-S of A is the biggest kid on the block, With that comes the burden of being blamed for everything wrong.

But there is also something else you should realize.

Behind every coup and riot there are literal conductors to these orchestras of disaster and war. And since every leader wants international press coverage for their cause they riot and wage war in front of the American Embassy.

No one is going to let you yell "time out" so you can stroll in the very front gate they are trying to tear down. In fact they may ask you to be their guest at gun point.

The international airport that is also just a few miles away is the other big target. Again, big targets =big press coverage. Bad guys use things like youtube, myspace, facebook, and Fox News to get attention. Because like you they are fighting for their survival, good, bad or otherwise.

Now that KR&E Insurance policy you were advised to get doesn't seem so ridiculous. In it there are usually provisions that say for this much $$ we will send in men with guns to get you to a private airport and out of the country, negotiate your return, etc. But you or your boss thought it was absurd. After all this was just supposed to be a five day spearfishing trip in the Caribbean.

The sun has gone down, and your on the roof of your hotel by the pool listening to the crackle of automatic weapons fire and the wailing of sirens. The signal to your iPhone is cutting out, and you're relatively certain the news feed from CCN reporting two streets up just showed soldiers gunning down the citizenry. This was supposed to be paradise, now its a free for all.

So you have to improvise and start thinking hard, mean and fast, because you and your co-workers or spouse and the kids are alone, and you've got a Swiss Army knife. That carry conceal permit in your wallet doesn't have reciprocity in the South Seas and your SiG 250 and AR-15 are back home in the basement.

So how do you get out? What do you pack? How can you improvise weapons to get better weapons? How do you steal a car to get to the airport or the border?

Flight & Fight Part II: Bugging out and Arming up.... 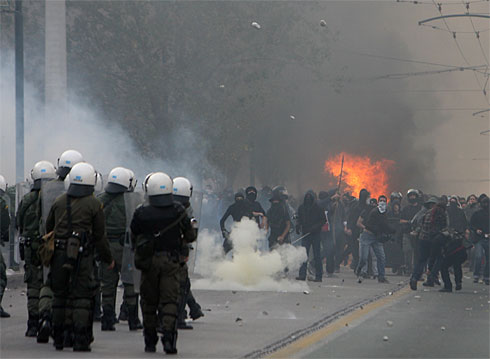 Very good stuff! Last December my daughter and I were on holiday in Athens when riots broke out over the police shooting a teenage boy. We watched in horror from our hotel as thousands of people literally marched against police officer. We'll keep reading.

Unbelievably good stuff. Thanks for sharing this series.

I just found your blog (thanks to James Rummel!) and it now has a link on my desktop. As a 'gunnie' type, I appreciate the calm and collected discussion about serious issues; thank you for your candor in discussing some ugly realities that many people prefer to pretend don't exist or who like to feel "that it couldn't happen to me". I look forward to your upcoming posts.

I've been in one of these situations and almost in another, which is not many but it's a sample. The ignorance among first world folks about escape and evasion in a collapsing order is amazing.

Even worse is the lack of self protective mind set. "How DARE they", "Don't make them mad", and "Someone will save us" seem to be not only the defaults, but the entire library of outlook.

These articles might be useful, I look forward to them.

If only they had taken the time to read your blog.

"CAIRO – Airport staff were scarce, food supplies were dwindling, flight information was non-existent — and some policemen even demanded substantial bribes before allowing foreigners to board their planes..."

"...Even having a ticket was no guarantee that tourists could get on a flight.

People holding tickets had difficulties getting on the plane, because the airport in Cairo is pure chaos," Canadian tourist Tristin Hutton said Tuesday after his plane landed at Germany's Frankfurt airport.

The terminals are full of panicking people. The ground staff is disappearing, and at the gate, just before entering, we all together had to collect $2,000 for a policeman at the door...

He would not let us pass without paying," added the 44-year-old..."

I was in Cairo at a location away from the typical tourist areas, we had been dropped off by Cab, but stayed late and when it was time to go back to the hotel we ran into a problem. This wasn't an emergency, just an illustration of the difficulties you can run into in a non stressful situation, now add flying bullets.

We didn't know how to get a cab to our location.

When we managed to flag down a cab, he couldn't speak english, {duh} but we were prepared, the hotel had given us a card to explain where to go. He couldn't read either. We tried to tell him, the Mariot, but he couldn't understand.

Eventually he flagged us to all get a seat and he took off into traffic, racing around, through shanty towns, down dirt roads, nowhere near any thing we recognized as the hotel area.

Eventually he is on another road near the university. He stops and flags a guy off the side walk to show the card. He looks and reads it to the driver. The driver looks at us and laughs, "the MARiot" "Ho ho ho" "MARiot"

Apparently we had the emPHASis on the wrong sylAble.

Haven't had such a weird cab ride anywhere else other than New York city.

It’s no secret that a man’s ego has a powerful pull on him.

In fact this hardwired need to impress and to WIN is so deeply embedded into the male mind...

That nearly everything a man truly desires is based around this biological “drive” to prove, succeed and to win.

It’s why so many men become workaholics, gym junkies or become obsessed with their hobbies.

But what most women don’t know...

...is how deeply this “drive” is connected to his love, desire, and attraction for the woman in his life.

And I’m about to show you how you can “tap into” a man’s ege to refocus that same drive and gut level obsession...

...on pleasing you, romancing you, and proving his love for you like you’re his sole purpose in life.

Here’s how: ==> The “Go Ahead” Signal That Makes Him Obsessed With Winning Your Love

P.S. When you tap into a man’s ego this way, you can cause him to literally become obsessed with proving his love for you. So please don’t use this on a man unless you are ready for something serious.