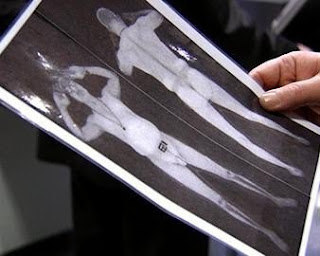 Sorry I've been "off air" so to speak. There has been a lot going on. The Wife suffering some harassment from a quasi-stalker, a client who's family may or may not be trying to kill her, another client who is a victim to a Ponzi scheme of which I=am actively trying to retrieve his quarter of a million dollars, a move to the new residence, and oh yeah the arrival of The Daughter. So life's been a little out there.

Somethings worth mentioning in this whole new debacle of "aviation security". The Pilots may be leading the way in the fight against this false hope of security. There is a lot to read so let's get to it.

PDF Links worth checking out.

First up. A Freedom of Information request to the U.S. Justice Department's Marshall's Service. The link is a response from the U.S. Marshall's Service General Counsel's office to an attorney for the
"Electronic Privacy Information Center". The response is based upon the wanting to know if the Backscatter body imagers can transmit the images downloaded [naked pictures of you] and, the short of it is...yes they can. I am assuming in good faith that the PDF is legit. Back channel resources assure me that it is, and that the response is from Uncle Same hisself. But hey it's the internets so you know....

The "other" PDF link
This other link for you tin foilers are the the TSA's requirement specs for WBI (whole body imagers) with a finalized date of September 23, 2008. My point being buried in this the TSA's Office of Security Technology System Planning and Evaluation outlined among many things that these body-imagers
be able to take detailed pics of the human body and transmit them electronically.
TSA Procurement_Specs

Finally I have pasted a copy of Captain David Bates of the president of the Allied Pilots Association (which represents 11,500 pilots) letter to his fellow members. It reads as follows:

In response to increased threats to civil aviation around the world, the Transportation Security Administration (TSA) has implemented the use of Advanced Imaging Technology (AIT) body scanners at some airport locations.

While I’m sure that each of us recognizes that the threats to our lives are real, the practice of airport security screening of airline pilots has spun out of control and does nothing to improve national security. It’s long past time that policymakers take the steps necessary to exempt commercial pilots from airport security screening and grant designated pilot access to SIDA utilizing either Crew Pass or biometric identification. As I recently wrote to the TSA Administrator:

“Our pilots are highly motivated partners in the effort to protect our nation’s security, with many of us serving as Federal Flight Deck Officers. We are all keenly aware that we may serve as the last line of defense against another terrorist attack on commercial aviation. Rather than being viewed as potential threats, we should be treated commensurate with the authority and responsibility that we are vested with as professional pilots.”

It is important to note that there are “backscatter” AIT devices now being deployed that produce ionizing radiation, which could be harmful to your health. Airline pilots in the United States already receive higher doses of radiation in their on-the-job environment than nearly every other category of worker in the United States, including nuclear power plant employees. As I also stated in my recent letter to the Administrator of the TSA:

It’s safe to say that most of the APA leadership shares my view that no pilot at American Airlines should subject themselves to the needless privacy invasion and potential health risks caused by the AIT body scanners. I therefore recommend that the pilots of American Airlines consider the following guidelines:

Use designated crew lines if available.

There is absolutely no denying that the enhanced pat-down is a demeaning experience. In my view, it is unacceptable to submit to one in public while wearing the uniform of a professional airline pilot. I recommend that all pilots insist that such screening is performed in an out-of-view area to protect their privacy and dignity.

If screening delays your arrival at the cockpit, do not cut corners that jeopardize the safety of the flight. Consummate professionalism and safety are always paramount.

Maintain composure and professionalism at all times and recognize that you are probably being videotaped.

If you feel that you have been treated with less than courtesy, respect and professionalism, please submit an observer report to APA. Please be sure to include the time, date, security checkpoint and name of the TSA employee who performed the screening. Avoid confrontation.

Your APA Board of Directors and National Officers are holding a conference call this week to discuss these issues and further guidance may be forthcoming.

While I cannot promise results tomorrow, I pledge to dedicate APA resources in the days and weeks to come to achieve direct access to SIDA for the pilots of American Airlines. In the meantime, I am confident that you will continue to exhibit your usual utmost professionalism as you safely operate and protect our nation’s air transport system.