If you have not heard of Sunday At Noon, now you no longer have to live in the dark. 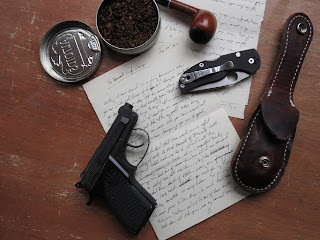 Writing, I have learned, is a funny business. When in the full throes of it and, doing so consistently you don't want to stop. At the same time you have this nagging bit in you secretly fearing that someday you will run out of things to say.

For me at least for me, writing can be a bit of a task master, requiring me to do it constantly in order to feel like I am any good at it. Step away too long and, it can feel as though you have moved out of a country whose language you once spoke fluently.

One must understand that these words are in effect and apology of sorts to Mike Barranti of Barranti Leather, the famed holster maker. As I sit and, write this, it is a beautiful Sunday morning, the last one of this particular June and, we are tent camped at the foot of the Sawtooth Mountains, along the Wood River, just North of Ketchum, Idaho. The Wife, the Kid and I. My pen scrawling it's way across the notebook that sits on a well worn wooden table top. My Ruger convertible Flattop .forty-five shucked into one of Mike's IWB holsters made for single action revolvers.

A far cry from a week prior to this trip when work took me to one of those not-so-gun-friendly big Eastern cities. Last year I sent Mike a request. Could he make me a leather "coin purse". One that could carry around ten dollars in quarters and, be worn on my belt as part of my everyday carry.

About a week later, I was stuffing quarters into the little leather pouch.

After carrying it every day for months on end, I have found it remarkably handy. It has a long leather strip that can be gripped in the palm of your hand, while it also folds over and, snaps together with the bottom of the "coin purse" to securely fasten itself and, ride on your belt.

The whole deal, is a long tear drop shape, very (very) similar to those old school blackjacks a man might have carried in his back pocket in the last century. Oddly enough, when jammed full of quarters, or dollar coins it even has a similar weight as one of those old time skull smackers.

Mike designed his "Barranti Life Changer" to have a small flap at the top of the "coin purse", to which you insert your change. This is in contrast to similarly styled "coin purses" that have a zipper down the center that could potentially bust open if it were to befall a hard surface. Not like those old blackjacks that were used to smack an attacker in the head. Those are of course, two different scenarios. The last one certainly not to be under taken by an all leather, one handed "coin purse".

Of course, upon seeing that the little leather flap is unsecured might make one wonder about the possibility of change flying out and, all over the pavement. Say, if you were required, for some unknown reason, to use your non-gun hand to reach back on your non-gun side and quickly deploy the "Life Changer" in a swinging arc. Perhaps to settle a sidewalk dispute with a parking meter that is just mere moments from expiring.

In order to assuage such worry about any unexpected lost of coinage, I decided to test the "coin purse" out. Because while it might look similar to one of those old lead filled saps of the nineteenth and twentieth centuries, this after all is a "coin purse".

Raiding an old camp coffee mug where I keep quarters, I managed to stuff in twelve dollars worth into the Barranti Life Changer. I gave it a few overhead swings and, didn't lose a single quarter. After wearing it on my belt for a few days, it felt a little too bulky for my preferences. Taking out two dollars worth of change flattened the "Life Changer" out were it rode a bit nicer on my belt, next to a single stack 1911 mag holster.

Not having any parking meters available at home at which to swing at, I opted for the next nearest option. My 1986 vintage, 80 lb canvas Everlast punching bag, to test the overall durability of both the leather and, the stitching against any potential loss of of change, should the "coin purse" strike a hard surface and bust open. Delivering more than a dozen blows against the canvas punching bag there were no rips in the leather, not a single stitch popped loose. There was only the oddly satisfying "thud" of the little leather "coin purse" hitting the bag.

One might find such behavior a little odd. Why after all would someone want to repeatedly smack a leather "coin purse" against a punching bag? Yet, I could contend that this is no different than when the employees of Cold Steel, the knife manufacturer, lock a folding knife into a vice by the blade and repeatedly add twenty-five pound plates to a piece of wire hanging from the handle until the locking mechanism from the knife fails.

Torture testing a product doesn't have to make sense after all, even it is proves to be informative.

Seventeen years into the twenty-first century, a "coin purse", like the Barranti Life Changer, might seem outdated. Loose change in a plastic card world and, what not. What surprised me was just how useful it has been.

Despite the fact that parking meters are going more towards a credit card based system in major urban areas, most of the machines I have encountered still take coins. On one recent business trip, I encountered a turn pike toll booth that was not only unmanned but, only accepted loose change. Ninety cents worth of loose change to be precise. Not generally an issue were I in my own truck but, good luck finding loose change in the console of a rental vehicle.

Should you find yourself, not needing  a small leather pouch full of change, you can simply substitute quarters for dollar coins, of which you can carry around fifteen dollars worth. Which gives it real purpose in buying anything from a cup of coffee to a sub-sandwich. It being up to you to refill the pouch with money when it drops below the desired amount/weight.

Lastly, the nice thing about carrying a pouch full of legal tender on your belt, is despite an ever increasing environment of security theater, whether it's at your local court house, or flying these unfriendly skies as of late, a "coin purse" is perfectly legal. Though the Barranti Life Changer certainly sounds a lot more masculine than "coin purse".

There is also something to be said for going through your life carrying something handmade, especially when it's handmade by Mike.

In a world that is obsessed with plastic 9mms this and, kydex holster that, there is a lot of old school gentleman and, everyday usefulness for things like the Barranti Life Changer. Whether it's feeding an urban parking meter, paying your way through a toll booth or, the laundry mat in Ketchum, Idaho.

The Barranti Life Changer goes for $55 and, you can reach out to Mike at his website  barrantileather.com
at July 04, 2017