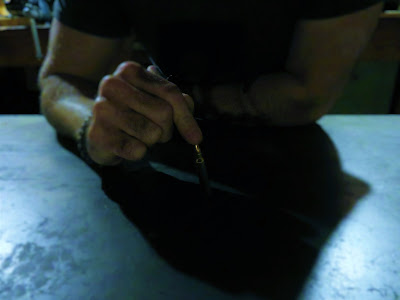 In his book "Never Give In!" Winston S. Churchill, the grandson to, well...Churchill related a story in the preface. Here he describes that his mother was just twenty years old and about six months pregnant with him in the early summer of 1940. The British had fallen back from Dunkirk, retreating across the English Channel, France was falling to German occupation and Hitler was preparing for Operation "Sealion", which was his codeword for the invasion of England.

One evening, before the air raid sirens would begin, sending the family to the basement they sat at dinner and Churchill's daughter related how he was brooding at the dinner table. Buried in thought. At some point he ended his silence and said:

"If the Hun comes, I am counting on each one of you to take one with you before you go!", "But Papa" his daughter exclaimed, "I don't have a gun and, even if I did, I would not know how to use it." "But, my dear," Churchill said, his voice increasing in power and fist held high, "You can go tot the kitchen and grab a carving knife!"

This was Churchill at the core.

In the aftermath of the ISIS attack on San Bernandino there is much being said about a lot of things from the politicos...and most everyone else. Like everyone else I have my feelings on each bit of it.

Contrary to what you may think, if you have read me here for any matter of time, I am at my core a sincere man of peace. I believe in the right of the individual to live their life as they see fit and to believe as they choose as long as they bring no harm to another. It's my belief that violence is an answer best saved as an absolute last resort.  If for no other reason, violence has the inherent issue of affecting the lives of people not directly involved.

Yet, as much as I believe in living peaceable I do not by contrast believe that anyone should live under willful naivety.

We, the world, are in a war with the Huns, just as Europe was with Germany. Only our enemy is far more opaque. There is no uniform, no central power, no "one man" as it was with Hitler. And while we live in a post 1945 world where we know that outcome, once upon a time, such was not the case.

Much like the politicos are weighing in, so are many in the defense community. And they do so with understandable reasons, my inbox is well flooded at this point with so many questions from enough people that it would be time consuming to respond to them all.

So here is my advice.

Should you meet with a person bent on a campaign of terror, intending to murder their fellow men and women, to leave behind a swath of widows, widowers and orphans, to grieve families and nations alike. Do the reasonable thing.