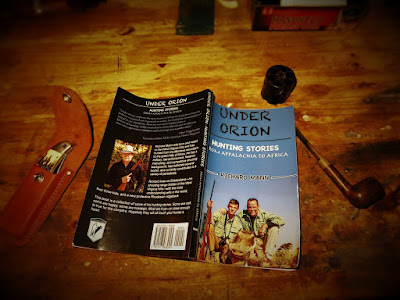 When the NRAAM (the National Rifle Associations Annual Meeting) in 2014 was in Indianapolis I came walking out of the convention hall looking for a cup of coffee and a place to sit. I found the first and was stuck leaning against the wall as no chair was to be found. Left alone long enough to stand around and do nothing the old bodyguard in me comes out and I start people watching, and to be real honest the NRA convention makes for pretty good people watching.

At some point and time I saw Jeff and Boge Quinn step off an escalator and I pushed off the wall to go and introduce myself and chat for a moment. As I recall, Jeff was carrying a microphone and Boge a camera and they started setting up to record a piece. As soon as I saw this I decided against, as not to interrupt a couple of guys working, the problem was having pushed off the wall and I was now committed in my head that I was going to talk to the now occupied Quinn brothers. So there I was standing away from an otherwise decent wall to lean against with no one to talk to.

It just so happened that I looked up at the top of the escalators and saw Richard Mann leaning against a rail watching the world go by. Earlier in the day I had the opportunity to meet him in person, while having a ham sandwich and talking with Ed Friedman and Jay Grazio (I'm just going with the name dropping at this point. Stick with me it might get better). We had exchanged pleasantries and then Richard went on to talk with Ed about how he could wound animals with a .223 or something.

Now he was standing all alone minding his own business with a posture that said clearly "Leave me alone I've had enough of people today".

Ordinarily I'd leave another man alone but I had always enjoyed his writings and he looked kind of old and tired standing up there and I thought "Well Jeff Cooper died before I could meet and talk with him. I'd better risk it".

Fortunately for me Richard didn't throw me over the rail and we spoke for a few minutes and he gave me some advice here and there on writing and then we parted ways.

Last year he self-published a book called "Under Orion: Hunting Stories from Appalachia to Africa" and a couple of weeks back I ordered a copy for myself from Amazon.

Unexpectedly, I finished it tonight. It had not been my plan, which was to do some reading from Morton Hunt's "The Story of Psychology". Richard's book happen to be on top and I could see I was getting near the end and I was trying to preserve it just a little longer but, then I opened it up to the dog eared cornered page that was titled "I don't believe in ghosts". Had it been only titled and been devoid of any photos I might have been able to resist. The problem was, there was a photo near the bottom and it was of Finn Aargaard.

As a gun obsessed teenager I loved anything Finn Aargaard wrote and, when he passed away in 2000 it struck a real cord with me at the time because his death made real to me that the last of the great gun writers were starting leave us.  Gary Sitton would go in 2005 and Jeff Cooper in 2006. As much respect and admiration I had for the late Colonel Cooper and everything he did for modern hand-gunning, Finn Aargard's death, to me at the least, ended the golden age of gun writing.

He was my generation's combination of Townsend Whelen  and Frederick Selous. So it didn't take much persuasion to disregard Hunt's book of psychology for Richard's brief moment shooting Finn's well known Model 70 in .375 H&H.

Then twenty pages later it was done. I had finished Under Orion.

In this age where 90% of the gun writers are not really gunmen and not even really writers, Richard Mann is both. And he writes in the way the old timers did. His own.

What makes Under Orion so worth while is that, it's not a chronologically written autobiography of Richard's hunting life nor a book that is page after page of "So I got me another trophy animal after the last trophy animal and I wasn't even...."

Instead it's about the triumphs and sorrows and at times hilarious moments any man or woman who has ever loved to hunt and had the chance to do it enough experiences, with a little bit of the West Virginia Hillbilly waxing poetic about wool collars and cold breezes. Which you may roll your eyes and think that part unimportant but, for those of us who have in fact buried ourselves a little lower into a wool collared hunting jacket on a cold morning watching the sun break the woods orange and the squirrels make as much racket as a city street the poetry and motion of life in the woods matters.

The title of course refers to the constellation known as Orion which is the best constellation because it belongs to the hunter. When I see him, Orion, up in the night sky I am taken back to my formative years deer hunting with my dad and my first real rifle, a Remington 788 in .243 Winchester. I'm huddled in an old wooded tree stand hours before sun up watching Orion through the pines. Crossing an early morning field with a buddy, or in the San Juan mountains north of Durango.

Perhaps most of all Under Orion is a book that gets it. And by it I mean how the small things in life matter so dearly much. The value of good friends, smart dogs, beautiful country, the smell of early mornings and good rifles.