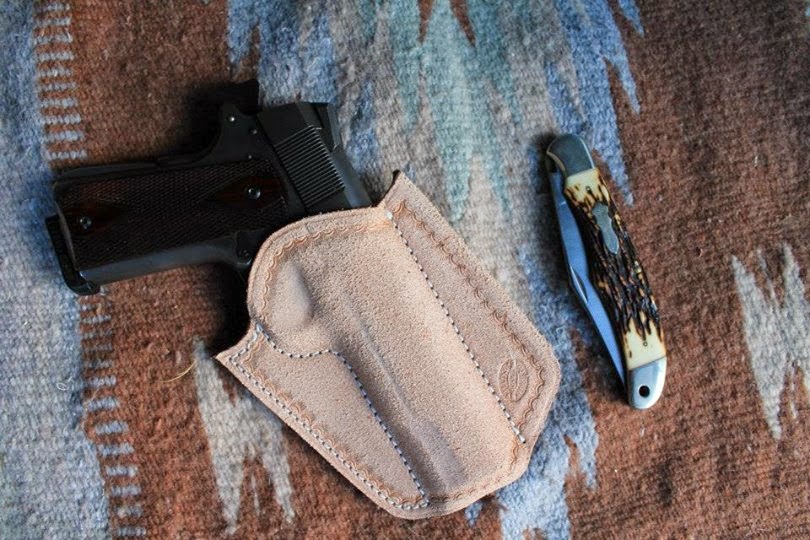 You always hate those situations where you know that if it goes bad, it will go bad in a big way, all the while knowing that you have to appear incapable of being able to deal with anything bad, while being completely capable, in a moment's notice, of dealing decisively with the now bad situation.

A couple of winters back like a bad novel I was carrying my .45 in the pocket of my heavy wool pea-coat, a Hissatsu folder in my waistband, a bitty little light in my jeans pocket and that was pretty much it.

Once inside of where I needed to be my jacket had to come off and I was essentially carrying off body. The coat went wherever I went so it was never helpless situation and, the problem really wouldn't exist if it was going to, until I went outside. At which point the coat would be back on. I dutifully left my gloves in the truck so there would be a reason to have my hands in my pocket once out in the 15 degree night air.

The issue was the big Colt flopped and turned around in the coat pocket and while plenty deep as not to fall out, once back on and hand in the pocket, the pistol had rotated and now rode upside down.

Hammer down in condition two or not, it was not ideal. I fumbled around in my pocket saying something about losing the cigarettes I didn't have and don't smoke, until finally the gun was properly aligned in the pocket and hand. A few words were spoken back and forth as I walked outside and the entire ordeal was over having gone smoothly.

On the drive back, with Colt's Commander riding in my waistband I cussed at myself for not being better well suited for big auto pocket carry.

Oddly enough I couldn't help but thinking of Tommy Lee Jones in the movie "The Three Burials of Melquiades Estrada". Through most of the movie Jones rides horse back with a 1911 shoved into the back pocket of his Wranglers. Over and over I thought that a real basic pinch fit leather holster that could slip into the back pocket, that didn't have any loops or clips attached to it, and carried the gun juuust tight enough as to not come out freely would be a handy thing to have.

The more I thought about it, the more I liked the idea. Winter became Spring and, finally Summer then late one July night I finally knew what to do. Or rather who to go to.

I emailed him outlining my needs, wants, and desires for such a thing and Mike knew exactly...and I mean exactly what I was talking about. It was an old timers carry, like turn of the last century old timers, and apparently Mike had tooled around with the same thought himself. About eight hours and one sunset and sunrise later he emailed me a photo of the very image in my brain. 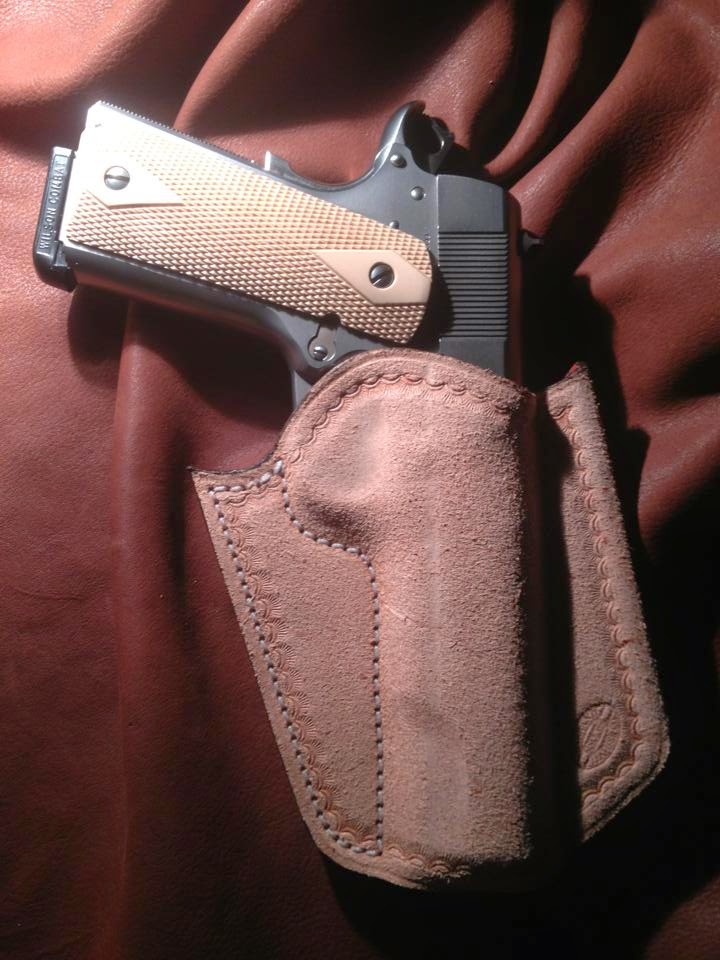 Without hesitation I said "I'll take it".

A few days later it arrived by mail.

That was July of 2013. A year and a couple of months later I still love this holster, which is good because it sees daily use.

And I never break it.

That is not to imply guns lay around the house. They do not. They are all secured after a fashion one way or another, against un-welcomed visitors and toddlers alike.

At the end of the day when the I take off the old Colt, de-cock it, open the box and it is slipped into it's next place of residence. The Hip Pocket Holster.

Lest you are under the impression that this is all the use the holster sees it is not. Some of my time in the field requires prolonged surveillance. Hours and hours...and hours of sitting. Something the introvert in me never minds. That sitting can also mean, laying, sprawled out and waiting at all sorts of angles and positions beyond the driver's seat of my old 4Runner so it's nice to be able to take it off but still have it in a ready position.

With the absence of things like a re-enforced mouth, or clips, or loops the overall width is very minimal and allows the pistol to be wedged perfectly in someplaces. Yet the wet molded, pinch fit is loose enough to allow a draw where the holster does not come with it, while having very reasonable retention in a gun slip like this one. 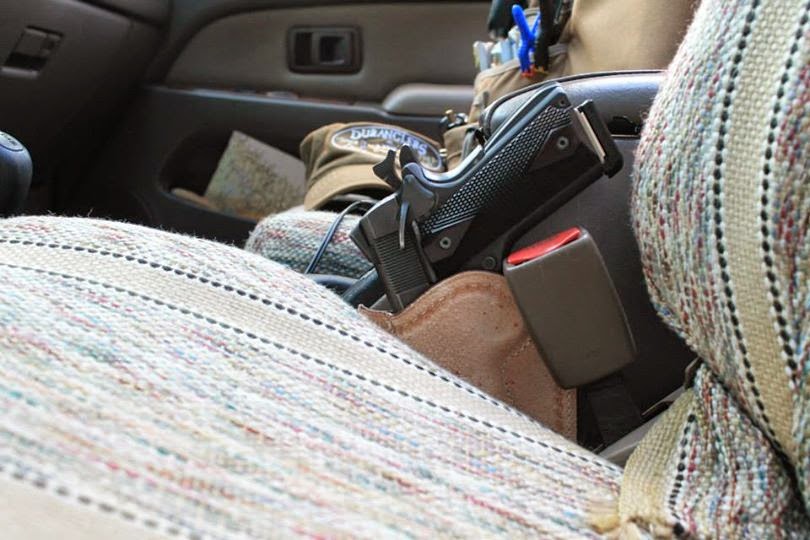 Mind you. This is not some flimsy suede piece. While the mouth is not re-enforced with a double band of leather or other means of staying open, the molded to perfection gun skin stays open after the pistol has been drawn.

Most nights before turning in, the dog and I walk the acre and a half we live on and more often than not my pistol is slipped into the back pocket of my jeans. If drawn it can be re-holstered without looking, quickly and easily. 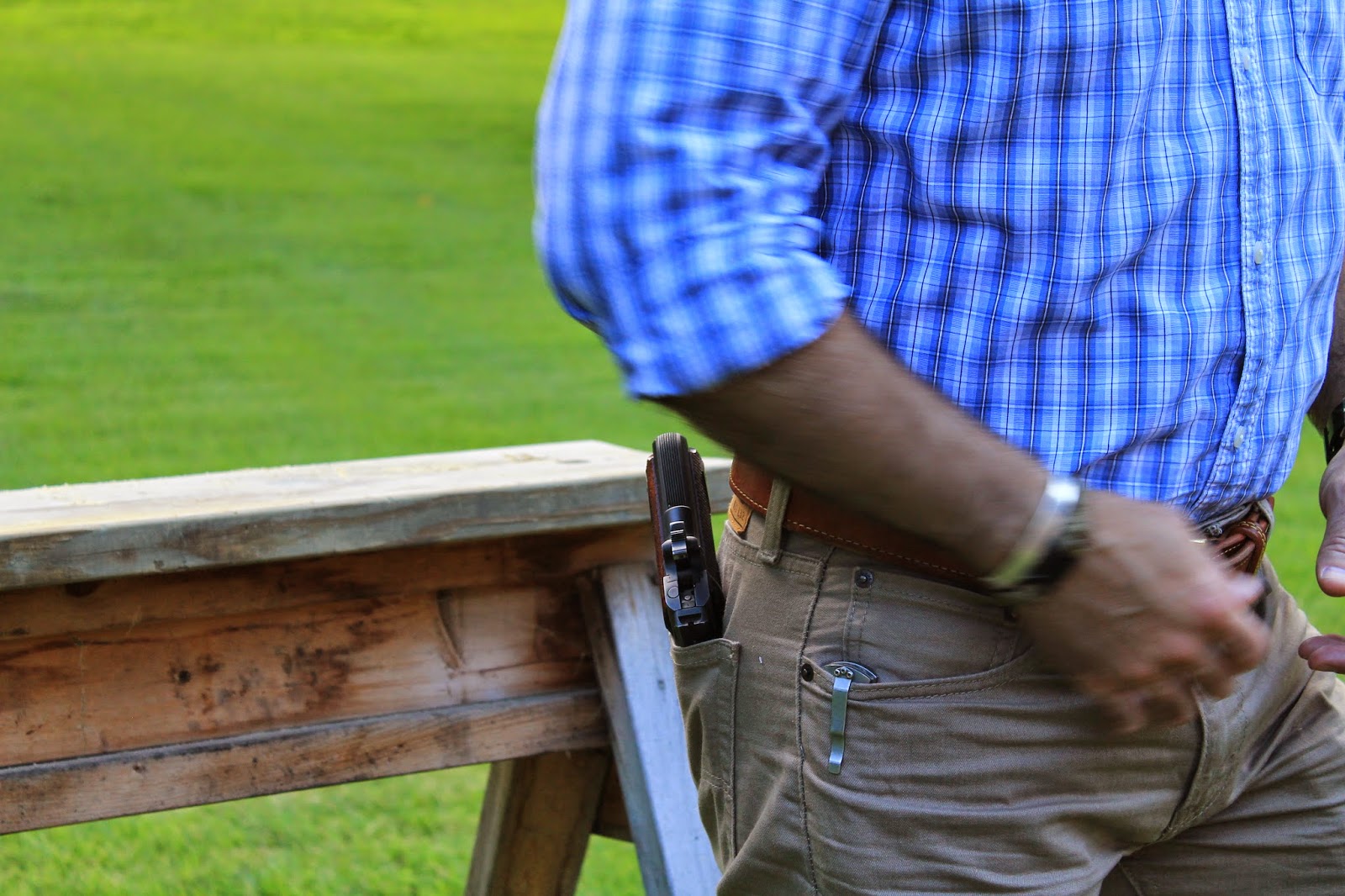 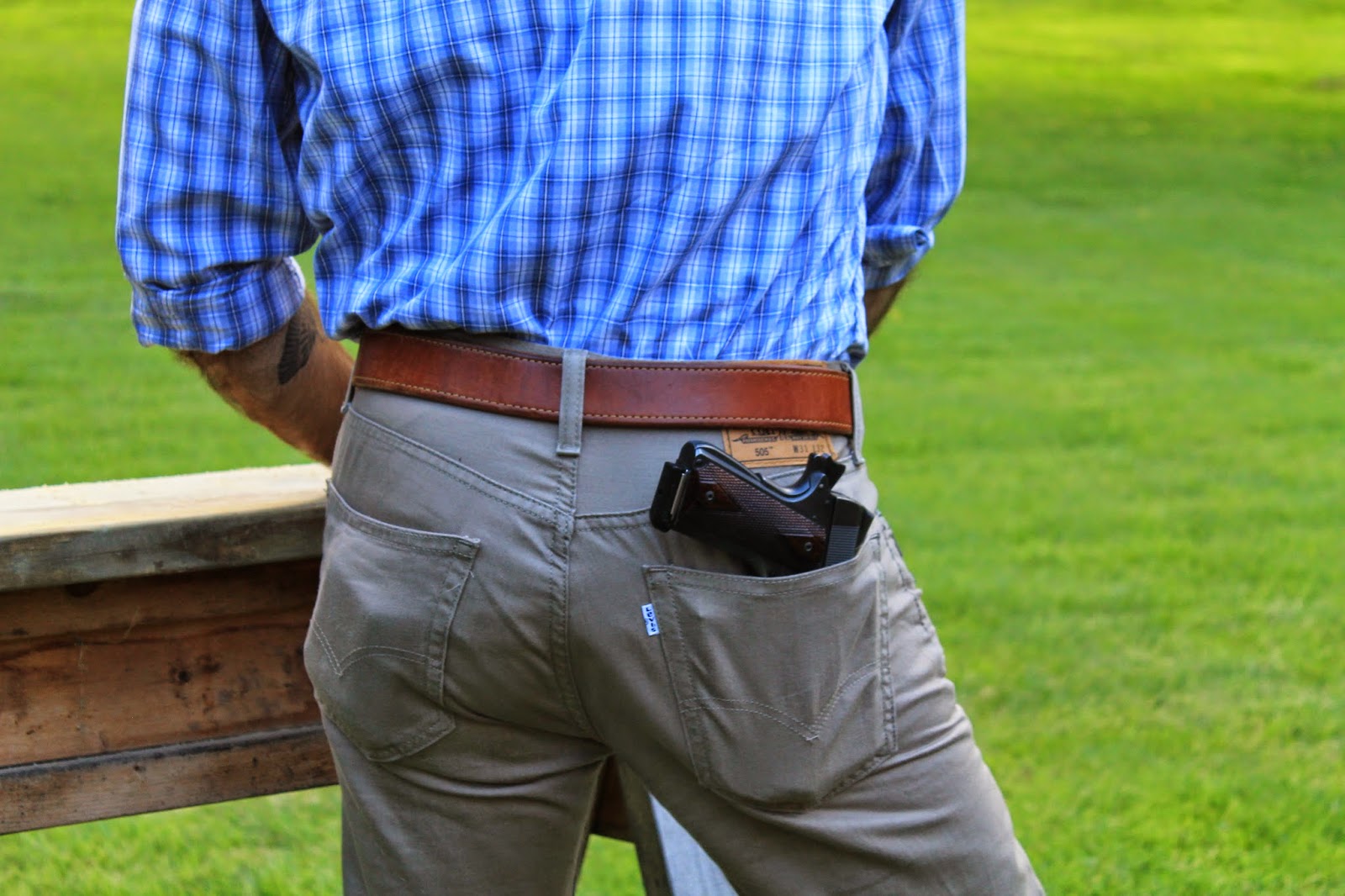 Coming around full circle, I like this holster for one more reason. Winter time. Remember where we started. A pea coat pocket full of .forty-five?

One significant disadvantage in conceal carry comes in winter time. Not in the way so much of carrying, but rather getting the gun into action quickly with a heavy buttoned up coat.

Say for example, I'm out at dinner. It's below freezing and the old 4Runner is parked a few blocks away. The evening ends, everyone is putting on coats, saying goodbyes and what not. I take that opportunity to go to the restroom and put my coat on. I'll take my Colt's Commander from it's In-the-Waist-Band holster and slip it into the Hip Pocket Shuck ready and waiting in my coat pocket. I can keep my hand on the gun my entire walk if I so choose and never have to worry about undesired finger-trigger slippage. Yet I can also rest assured that with my hands not in my pocket the big gun isn't sliding all over the place.

Lastly, There are times in my life, for one reason or another, that off body carry bears merit. In such cases the holster works well to keep the gun upright in a bag without any bulk added like a thicker conventional rig simply shoved in to a pack might have.

Just like there is no magic "one gun" solution for all things, there is no "one holster" solutions either. This rig, while very simple fills a lot of roles in my life and it does them very very well.

So what does it cost? The last time I asked Mike about this he said "$40 plus shipping".

$40.00 for a holster that comes from one of America's best leather rig makers. Not much thought need go into that one. Eventually I'll order a couple more of these. Probably for my snub-nosed Smith and one for my Ruger Flattop as well.

A good many shootists carry Mike's rigs and love them dearly. I now know why.