The Rifle over the Hashtag.

How the women of Nigeria are beginning to respond to the Boko Haram.

A hashtag hold's no power. It is a sanctimonious chant that words can save people. Yet, as many people around the world, who have been left at the hands of bad men and terrorist know, that "help" is only a bureaucracy and months of paper work away. Therefore the rifle does indeed matter and may still turn the tide in the war against evil.

"the rifle has no moral stature, since it has no will of it's own. Naturally it may be used by evil men with evil purposes, but there are more good men than evil, and while the latter cannot be persuaded to the path of righteousness by propaganda, they can certainly be corrected by good men with rifles."
- Jeff Cooper Art of the Rifle.
at May 29, 2014

A return to the dark arts

The mind is a funny place, because rarely are we ever "done" with something like we may imagine.

For all intents and purposes I was done with the Dark Arts for Good Guys series. There were a couple of articles that I had always intended to write, there were two more I wanted to write more than anything but... good judgement won out. Who knows maybe someday in an underground form I will but until then they lay dormant in my mind.

As for the other two I have decided that I would very much like to see them written and for whatever reason where I once struggled to gain a foot hold on the thoughts, that become the words, that end up here have formulated.

They will be in classic fashion I assure you. In all likely hood there will be a gear review first and then the Dark Arts for Good Guys: Just..... The worst notions in the modern age are those which are preconceived. Even if some are unspoken.

Those such as, the immediate availability of dozens of rounds of ammunition in one's firearm will guarantee success in a fight. Or that someone is possession of that amount of rounds is destined for evil acts.

Though most of us would agree that the later of the two statements is not unspoken but, rather one spoke with unyielding beratement amongst the hoplophobes. "Educated" or otherwise.

For the better part of twenty years (or more) the personal defense community has said the revolver is dead. One might conclude that it did not "die" but, rather proceeded to excel in the twenty-first century in smaller form.

The small framed .38 Special and .357 Magnum lives well today in light weight frames, though having experienced the titanium-scandium-fun-to-carry-hell-to-shoot recoil of the .357 Magnum from a not quite so two inch barrel I'll keep mine in all steel. Thank-you-very-much.

Of my three normal carry pieces, two of them are revolvers, the Colt's Commander in the large Automatic Colt Pistol cartridge being the first. The other two being both Smith & Wesson's in .38 Special and .357 Magnum. Whenever one (or two) of these are being used the others rest in the gun safe.

However, I tend to keep my normal carry spare reloads all together. Where I keep all the other things that fill up my pants pockets for everyday usage. A few years back I made myself a small front pocket kydex...er..."system" that was designed to hold my flashlight and a 1911 mag. It turns out it does a semi-decent job of holding a speed strip, or five shot speed loader, in their proper place.

All was essentially fine with this "system" until I bought my Smith Model 66 a few years ago. Due to over penetration concerns as a general rule I carry both my revolvers loaded with .38 Special standard loads (my 442 is not +P rated anyway) but, with the Model 66, when I do carry it, I like to have a set of full house .357 Magnum loads as the reload.

Generally I use the speed strip to handle the reload because of the bulk of the cylindrical speed loader. Then one night I came home and took off my Model 442 (in .38 Special) and as I retrieved my reload/flashlight combo from front left pocket something looked off.

And there it was.

I had shoved .357 Magnum spare reloads into my pocket. Which no matter how hard you cram them into a .38 Special cylinder they just aren't going to fit.

So in order to remedy this from happening again I dug out a pair of scissors and cut the "tail" off the speed strip that holds the .38 Special reloads. Now, if I have to, or just so happen to, for one reason or another grab my spare revolver reload from it's place where all of my other EDC gear sits, I can tell by instantaneous feel. 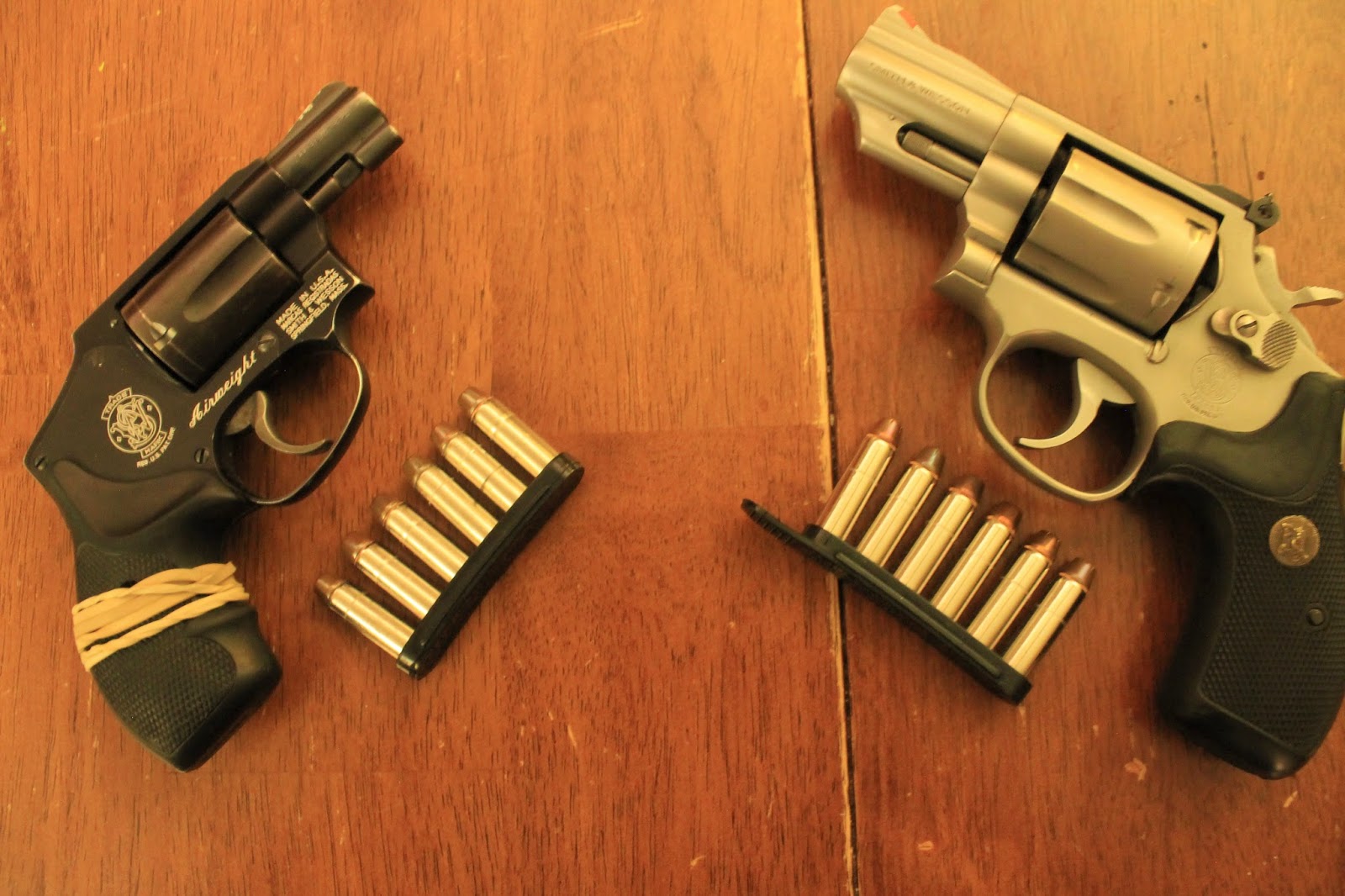 No tail on the Speed Strip = .38 Special Loads. 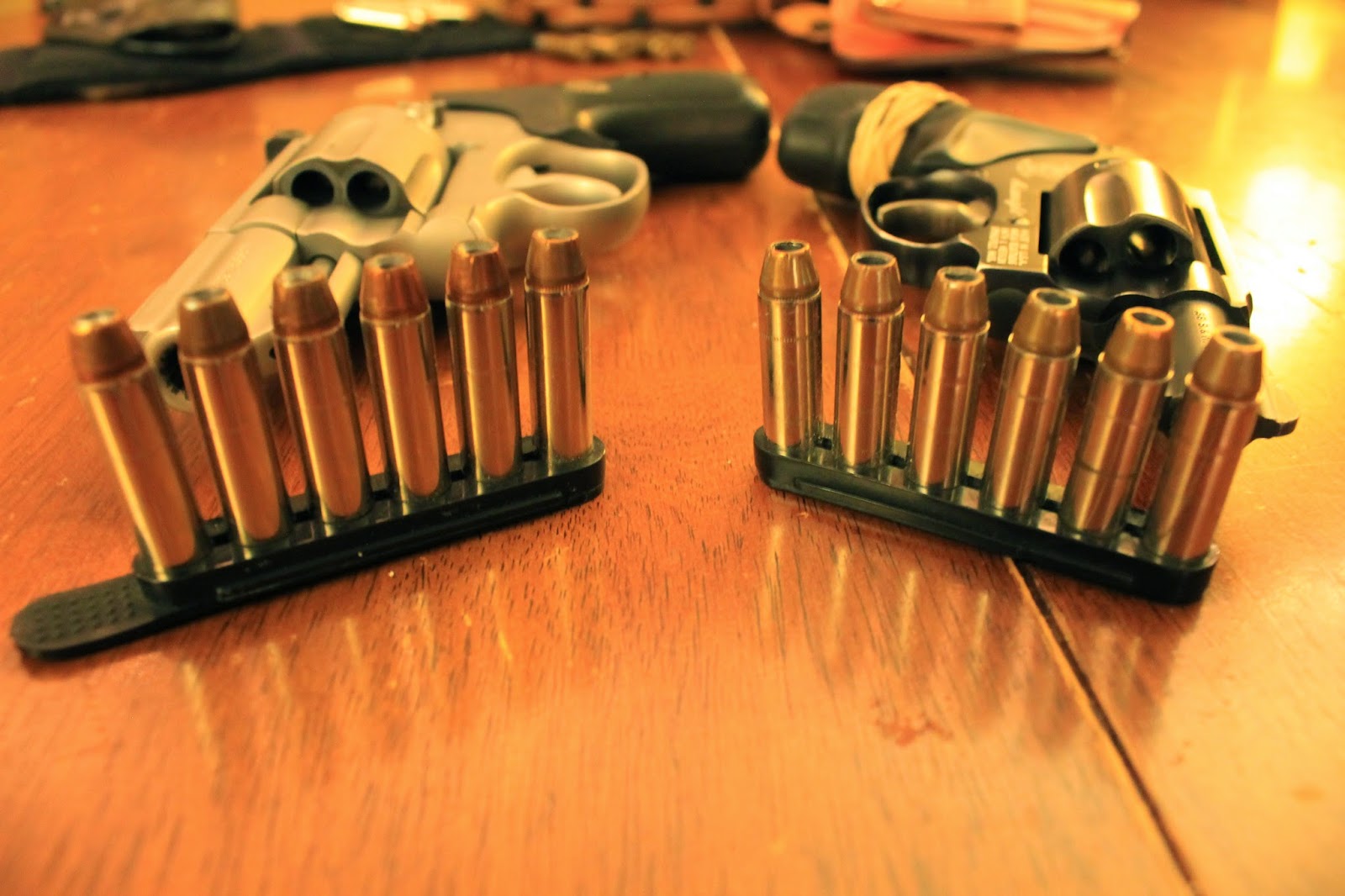 Lastly, one who carries the venerable .three fifty seven revolver with a short barrel, and equally short ejector rod, might gain a small advantage in carrying the .38 Special cartridge in the cylinder. In the event that a reload should have to be performed with deftness and social negotiations otherwise having failed, shaving a tenth of an inch off the start of a reload might make a difference in the end.

Firepower is a fine thing to have but, if all you brought to the gun fight is a gun you've already lost.