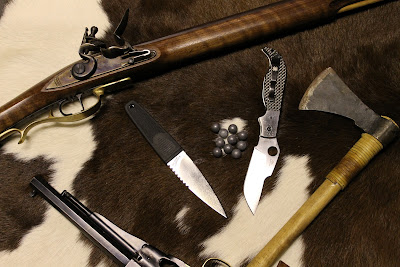 Everything about fighting starts inside your head.

Gun, knife, or hands. It makes no difference.

The response that begins in your head flows to your hands. That response is strongly aided in micro-planning, or rather the ability to deal and confront in immediate fashion because you have previously trained to do so.

Translation: In the eternity of a whole second a defensive resolution has to be formulated in your head and reproduced at your hands. After that your ability to overcome is dependent upon your ability to reduce the attacker's rate of survival in their encounter with you. This equates to liquidating their body of blood or stopping the transmission of signals from their brain to the appendages.

Damage has to be significant enough to encourage them to break off the attack, lose consciousness, or the use of the arms and/or legs....and it has to be done quickly.

Because in an encounter with violent humans it is generally a hands/brain combination that is your biggest threat, legs and feet being the second (yes dear reader you can still be stomped to death in the 21st Century). Most likely though hands are the problem this is why you hear it preached "Watch the hands. Hands kill."

If you are forced into the position to defend yourself with a knife-in-use this means being on the inside of the "dance space" as the late Patrick Swayze referred to it in Dirty Dancing , "This is your dance space. This is my dance space" (yep).

No other portion of the body allows for such an array of significant multiple and viable targets that in a matter of a few short seconds can lead to cascade-like failure for your attacker. Unlike the abdomen the chest has a protective bone structure in the form of the ribcage and shoulder girdle. However unlike the head/skull it is not a vault like structure and is readily penetrable. In fact 25% of all deaths in the U.S. is attributed to chest trauma. The trauma we are looking at here is predominately stabbing.

The slash cut has its place...without question. Where a slash to the surface of the chest cuts muscle and tendons its also stopped from further penetration from bone and a lack of  pressure on the knife because the grip angle for a slash is reduced in comparison to a push (read: stab). It's physics.


In the span of one second the average and capable adult should be able to deliver three smashing stabs across a span of nine or ten inches. Look at your shoulder and poke your finger inward every three inches.

Now instead of thinking skin deep, with each poke think was sits in between your finger tip and the skin of your back.

Or you can keep reading.

From the shoulder socket you can severe or atleast lacerate part of the lateral cord; which contains the lateral pectoral nerve, the median nerve, and the musculocutaneous nerve. But as the knife slices nerves it also cuts through multiple layers of muscle tissue and does so regardless of whether you are going at it front-to-back, back-to-front or from the outside of the arm inward. Cuts to the deltoid muscle works in tandem with the the chest muscles, biceps and on down to the forearm. A stab (or multiple stabs) while not necessarily lethal in the short term sense they greatly reduce your attacker's ability to attack effectively.

His mechanical ability to maintain a grip on you or a weapon is now reduced in significant fashion, but so is his ability to rotate the arm and the hand.

Why is this important?

Say for example he has a handgun, a stab here followed by a hasty exit on your part reduces his ability to raise, aim, and fire. The multiply factor is you are also now a rapidly, erratically moving target ever decreasing in size...meaning hard to hit under "good" conditions for him.

The other winning factor in this is if in your fight he ends up down on the ground it makes it difficult for him to push up and get up...not impossible...but the difficult factor is high. All because of a three to four inch deep cut.

Moving inward from the arm several inches a stabbing blow delivered to the chest has a high probability of puncturing a lung. It sounds "meh" to read it but instant deflation of one of the two lungs is almost an instantaneous fight stopper.

The internet experts like to tell you of the raging bull attacker who can't be stopped by multiple cylinders of .357. No one thinks of a 105lb woman with a folding knife deflating his lung that leaves him gasping on the floor like a fish out of water. Yet the reason is simple. Your chest expands and contrasts as you inhale and exhale and since breathing is an involuntary act your attacker is breathing while he attacks you. Sounds stupid right?

Who thinks of bad guys breathing in and out?

In the brief interlude between you slamming a four inch folder into his chest/lungs and pulling it out he has either inhaled or exhaled. One or the other. If he inhaled just prior to your stab you have unexpectedly robbed his body of air as it rushes from his chest. If he exhaled the lung has contracted.

Once a lung has contracted the internal world of his chest takes up that space (or tries to). This inward exerting pressure along with the hole in his chest prevents the lung from re-inflation either fully or parially. No re-inflation means no air.

No air. No fight.

His very own body begins to act like a boa constrictor, with each exhale the body tightens around the lung.


That last third of a second and your third stab wound going towards center mass stands a high probability of a direct hit on the heart. Unlike a slash to an arm or leg, a deep puncture will not stop bleeding from applying pressure alone. Drill the heart and you get severe-crippling pain (ask someone who suffered a heart attack about pain), and blood loss at an increased rate. Since the heart's job is to act as a double pump to collect de-oxygenated blood re-distribute freshly oxygenated blood to the body a laceration to it is "problematic" for the attacker. The body can not get fully resupplied (like any wound with blood loss) and significant trauma means the body can not get the oxygen it needs to aid in lung function and...brain function.

Count one full second while tapping your finger three times.

Three wounds in one second. From you to the bad guy.

Any attack is going to last several seconds under the best conditions for you. As you counter attack he has to block. If you are attacking the upper chest and head region almost everyone is going to try an raise an arm to block the attack. When an arm goes up to protect exposure also occurs.

You now have a direct line of counter-attack on the arm pit, the elbow, the lungs again, the forearms. A knife in one hand and an empty hand or closed fist allows for a quick barrage attack of slashes and stabs in short order. Hitting the underside of the arm near the arm pit means there is strong likely-hood of cutting open the brachial artery.

But do you get it?

Your attacker is human...just like you. When you are armed in one fashion or another you fight less an attackers brawn and more his ability to think through what was supposed to be a short win and is now a rapidly changing lethal encounter.

An attacker doesn't think in a sense of planning a defense. Yet we do. That means we have an elongated plan based upon being attacked and then overcoming that attack.

There is something else. If you haven't picked up on it yet. A knife defense doesn't mean a knife fight i.e. knife-on-knife. We are talking about the honest citizen/good guy taking on a bad guy armed in any fashion and winning.

The utilization of knife work in defense work also will get the internets fired up with statements like "you're gonna get cut". It's just not true that this is a "guaranteed" outcome. A woman in minivan can kill a rapist with a knife and never get cut, a dad grocery shopping on vacation fresh off the beach with a folder can blindside a gunman bent on a mass shooting and prevail physically unscathed. Everyone seemingly obsesses that they will get cut because there is a knife around yet most never seem to think or give more than a passing thought of being shot in an exchange of gunfire. Because in case no one ever told you in a gunfight you're downrange.

Stop trying to predict the future. You will either get injured or you won't.

If you obsess about getting shot or getting stabbed or otherwise killed you won't engage or you will do so blindly, stupidly and wildly. You can't treat your injury until the bad guy is dead, down, or fleeing. Make that happen faster. No one, not me, not you, not the best instructor in the world can guarantee your  life...if it comes to a toe to toe fight remember this:

You came into this world covered in someone else's blood you should, in the midst of a violent attack upon you, atleast leave in the same fashion.
at January 19, 2012