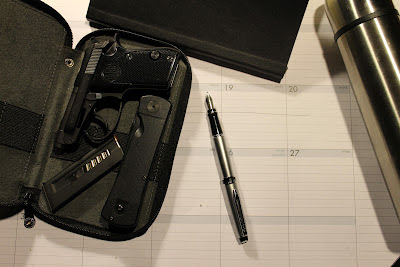 Once upon time I spent a week with a retired CIA spook (in Oklahoma of all places) who was kind enough...well actually he was paid, to give me some training in electronic counter measures, lock picking and a few other useful skills that would aid me in some of my future en devours.

One evening after a steak dinner someplace he went to pay the tab and was looking for a pen or something in one of his pants pockets and in the process laid out a worn pocket holster with a small automatic resting inside. It turned out to be an equally worn blued Walther TPH (German made) and, having never seen one before I wanted to know more about this Walther PPK someone had left in the dryer.

He told me of a few misadventures surrounding the piece but, it was his parting remark that stuck with me "If you are lucky enough to travel around the world armed and doing it mainly alone do yourself a favor always carry a .22 pistol, regardless of anything else you pack."

It was a piece of advice that I remembered sometime later when I was tasked with recovering someone who was missing on purpose because bad men were hunting him. For a real nice ten days I had a Beretta Bobcat that never saw use only because the gentleman who was in-charge of granting me access to where I was decided he liked it as well and the price of admission was...you guessed it. One itty bitty .22 pocket gun.

Some nights later sitting in the dark with the no-longer-missing-person-in-question getting ready to make a mad dash for the territory ahead so to speak and, people with not-so-questionable intent well within my comfort space...which was down the stairs. I didn't think about wanting a rifle, or even one of my beloved 1911s I remember longing for that .22. Not because I thought it superior weapon to anything else (because it certainly is not) but, rather due to the fact I should have had it with me.

I see you. Your neck all tense your fingers locked in tight. You've barely made this far without leaving me your expert opinion in the comments section.

If you are going to compare the calibration of the .22 long rifle to anything else (minus the .25) you have to ask why are you even having the internet figh....I mean discussion. Obviously it falls short so if you can bear that in mind you should be fine reading the rest of the post. If not there's not much I can do for you.

While some of us who inhabit parts of this planet are allowed to own, shoot, and carry a wide array of calibers, actions, and magazine capacity, others are not so fortunate.

For example contrary to popular knowledge gun ownership and even handgun ownership for self defense in Mexico is not actually illegal. It is just damn near impossible.

Because in Mexico there exists only one legal gun store and it sits on a military base in Mexico City. The law says a household can only have one defensive arm and it can be either a pistol or a revolver but, it has to be within the .22 to .380 scale...and you can only possess 200 rounds of ammo a year.

If I were a honest Mexican citizen and left with that choice I'd choose the .22.

If you live in such a place where it simply is that difficult to obtain a firearm what do you think the availability of shooting ranges are? Hence some things need to be done covertly where a drive into the country side and back into the trees you can fetch you some quality private time without a lot of unwanted attention.

And for people who live in countries such as those with restrictions it's also easier to FIND .22 ammo on the pseudo black market without having to delve truly deep into conversations with individuals your mother wouldn't approve of let alone the policia.

Say you had to be on the move through a varying landscape from Urban to semi-rural for a few days with various unfriendlies about. And you had to do this primarily on foot, or catching the occasional mass transit system, or train, or negotiating a ride for the next twenty miles. Maybe its to get in and find someone and extract them...maybe its just getting out. There on your hip concealed in all of its glory is your beloved full size center-fire pistol and two fully loaded magazines.

The point two two handgun, as the Brits like to say, offers a level of flexibility to your self-defense/feces-impellar kit.

There are times and places in this world were suppressive fire is just good application. For some folks who work alone, far away and, outside of official channels there is a place for the .22 in your life.

A fixed, threaded, or extended barrel can be temporarily suppressed, ripped off and tossed away in a moment solving an up close situation.

Likewise it can serve as a not so gentle reminder that incoming fire has the right of way to those who are actively shooting at you and trying to close the gap.

Perhaps the need in solving the problem is less than conventional.

In a mobile pursuit or an about to be mobile pursuit tires can be flattened from a distance. Traffic jams can be created BEHIND you thus assisting in the escape. Being pursued on a long and rural darkened road head lights can be shot out (don't intentionally misinterpret that as one bullet for one head lamp as if it were an steady and calm Olympic event).

And say what you will. I've never met a soul willing to pursue at a high rate of speed in near pitch black conditions. And while I've seen plenty of spare tires on vehicles I don't recall too many spare headlights.

What message would it say to your would be aggressors walking down the street if a shot rang out, then another and still another as street lights systematically were shot out. A man (or woman) willing to not only embrace a fight but, to deliberately do it in the dark will give pause to most anyone.

All that can be done without having to sacrifice your limited ammo availability to your primary center-fire handgun.

Because two hundred rounds can be squirreled away most anywhere let alone fifty or a hundred.

But then you knew this...

You know if need be, you can stash a couple hundred round of .22 high velocity long rifle rounds into a 20 oz Starbucks paper cup without having the bottom fall out.

There is something else you have to remember about bullets. All of them. The lowly .22 included.

Bullets cause destruction when fired into living things and in self-defense situations where it is your life or the bad guy's, creating trauma that stops his onslaught is the general idea.

Oh I know....I know. Your brother's cousin's nephew once put a .22 through his frontal lobe while squirrel hunting and, sneezed it out a few days later.

Bullets do weird things but those weird stories are about solitary rounds.

But five or six of those itty bitty rounds into the forehead or sternum cause repetitive systematic destruction.

Take your index finger and tap yourself once between the eyes. Just once.

Now do it five or six times.

If those where fast moving .22 rounds what do you think it would do to you.

Mentally? Not to mention physically?

Now apply this to a bad man.

Bone has been fragmented and broken, the body's primary control area has received substantial damage and things begin to shut down and not in some priority status way. The visual ability to target a victim has been either removed or compromised, not to mention the most basic ability to conceive, maintain, and rely upon any real thought process is gone....gone.

The attack breaks. Because the attacker is breaking down.

There. Again... I see you. Arms crossed. You are gonna play the trump card.

Guess what. There are no free lunches anywhere when the fight for your life is on.

Clear the fucking round and get back in the fight. There is nothing different about a misfired .22 and a stove piped 9mm. Both require you to disengage, do some manual labor and, re-engage. Personal responsibility isn't going anywhere.

One gentleman I knew, who worked all over the world in varying capacities carried two guns for the majority of his work. A Browning Hi-Power and a Ruger MK II.He managed to repeatedly come home from really shitty places and situations and, to do so he had to put in a lot of personal effort.

Ultimately there the opinion of many out there who don't ever favor the .22LR for defense work. I can say for me it has been a choice at times and it is never my first choice but one does have to remember this amidst the "stopping power" business. Bullet holes of any caliber in the throat end a fight as do puncture wounds to the lungs especially multiple ones. Regardless if they come from a .22, a .460 Rowland or a kitchen knife. 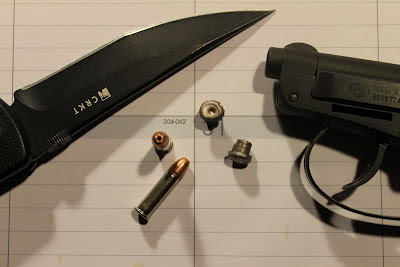