Dark Arts for Good Guys: The Right to Knife 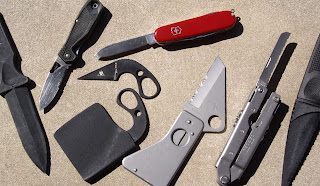 To what extent are you willing...and capable of saving your life? If no gun were available could you ...would you...are readily capable of doing so with a knife.
Would you slit an attacker's throat?
Could you use a knife to filet three inches of forearm off of a rapist, a serial killer?
Can you descend to that primal place of fight at bad breath distance and prevail? In a very real world people are attacked inside of elevators and the ability to escape may not occur until the word “Lobby” is back-lit. Mothers are forced to the floor boards of vehicles and raped in front of the children, adventure seeking teenagers are found beaten and tortured to death with their heads found in creek beds. Grown men are jumped and beaten by teenagers on subway platforms left mangled and crippled for life.
And this happens every-single-day.
Whether you are in the back streets of Kuala Lumpur, NYC ,a remote camp site in New Mexico or in the cubicle at your office park as a gunman walks around shooting people. A knife beats bare hands and, while a big knife is better the reality is when it goes down you're most likely going to have a folder or small fixed blade to work with.
Isn't a gun better?What brand makes the best tac-folder? I heard knives are illegal to use in defensive situations? Don't worry about it. This isn't an argument about which is better, or knife-nerding about why knives are cool.
The situation is this, you are about to lose your life. Save it. Because what you need more than anything is the willingness to engage..to step INTO the fight.
Into a fight......WITH a knife?
Why do you think you practice that 21 foot in one second drill at the pistol range? The dictum is that the average person can cover twenty-some-odd feet of ground in a second and start killing with a knife. Well brother the phone rings both ways don't it. If a bad man can cover a short distance fast and kill with a knife, the average citizen can reverse the role.
Look the human body dies from either one of two ways. Natural causes or trauma. When we talk about knives and bad guys we are talking about trauma. Therefore the idea in self-defense is to create a negative alteration to the attacker's body and...... to their mind. Screw with both of those simultaneously and winning is the by product, because you should never give an attacker much credit in the bravery or the commitment department. The moment they start losing they are in the hole, because they just invested in you or rather who-they-thought-you-were (read: Food).

It's a hard concept for decent people to get around, but for a career criminal they spend the majority of their time devoted to their career...just like you do. A rapist, a serial killer, a spree shooter, general thug doesn't think about getting on with a normal like. Rather they attempt to appear normal so they can operate in the same theater as you and I. Hence the old saying a wolf in sheep's clothing.
You having a bad work day, might mean a ding in the pay check or a reprimand from the boss, or an unhappy client. For the criminal it means getting hurt, getting caught and locked up or getting killed.
How do we go about delivering bodily harm with a knife to an attacker? After all there really isn't a place on the body that can't be stabbed or cut or cause copious amounts of pain so why bother thinking this through? I mean in a fight its going to be blind stabbing....right?
For the same reason we go to the pistol range and do live fire defensive drills, aim center mass or for the head. Because in these regions bullets cause the most destructive damage to the body.
And like that, using a knife for defense has some great areas, good areas and available areas. I won't say bad because lets face it even if someone can function with a knife stuck in the top of their skull it's not “ideal” living conditions for them.

Here is the last thing I want you to remember as we go about breaking down the target areas of the body. Think about it now, occasionally as you read this by stopping and closing your eyes, and when you lay in bed....IT-IS-GOING-TO-BE-A-CLOSE-FIGHT.
Closer than you want....and closer than you may think you are capable of dealing with.
Think of his bare teeth and spit an inch from your nose, his hand gripping a fistful of your shirt, his forearms snaked around your throat.

Worried a bit? Hesitant with that idea? Scared out of your head but don't want to really admit it...that's cool get it out. Now take a minute to close your eyes, wrap your weak hand around his throat, take that thumb of yours and *click* open that tactical folder of yours and win.
Upfront. Stabbing beats slashing for the purposes of increasing a lethal wound quicker. A slash bears a strong psychological bomb. Lance the body and it opens. When it opens things spill out. It also creates a long external but, shallow (relative to how deep you cut) wound area. Blood and muscle are now exposed and there is likely nerve damage but the slash cut does its best on bare skin. Great if your attacker is naked or even half naked. Not so good if he is wearing a down jacket. Though from a tactical advantage the slash-cut to the face (especially above the eyes) is going to be a thin cut because of the amount of bone-to-skin but head wounds bleed bad. Blood in your attacker's eyes is going to keep blinding him until he contends with it. This requires putting pressure on the wound, which in turns requires one or both hands. Thus increasing your target area on him and decreasing his ability to cover his vitals.
The puncture however is what we are looking for whenever we can get it. A ball point pen requires something like 5lbs of pressure to break through and create a puncture wound on soft areas (like around the carotid artery). A knife, especially with a good clean point a pound...maybe two. Go push on a scale and see what that feels like.
But we are not talking about being nice here. If you are puncturing you should be s-l-a-m-m-i-n-g the blade into him with 20 and 30 lbs of pressure. The deeper the wound channel the better. Couple that with multiple stab wounds and the fight changes quickly and in your favor.

Queasy uneasy yet?
Not very politically correct? What do you think your bullet fired from your pistol does?
It creates a penetrating wound that in some cases will go in the front and out the back. Your bullet stabs a hole in the body of your attacker. With a gun you are getting to do it from a distance. With a knife and especially a small one you are doing it body on body contact and you are having to physically manipulate that blade past clothing and skin hopefully glancing or all together missing bone in the process.
Still think you don't need to practice?
THE HEAD 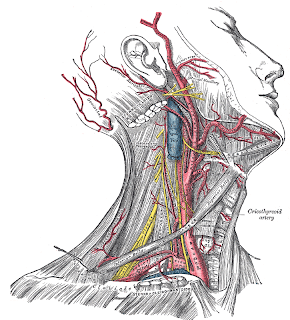 The head isn't that great of target for the knife as it is for the bullet. The skull, which acts as both a vault to protect the brain and to give structural support to the face is dense, hard, and round. All joking aside it's not an unlikely possibility to slam a knife into the cranial vault and find out it's stuck. While a blade in the head is....well odd and obviously dangerous it's not necessarily fatal or even painful (though it could make for a decent handle to grip on while deliver blows with your fists until he stops). There has been more than a couple of people who have walked themselves into an ER with something stuck in the skull.

The vulnerable areas of the head are the face and the base of the skull, which if you look at sits higher than you think. The chin for example can sit more than a few inches below the skulls base by comparison.

So while stabbing and slashing the back of the skull is pointless when compared to other parts of the anatomy, the skull's base is not a bad area to attack. Get below the Occipital region and target the Cervical Vertebrae with stabbing blows or deep cuts and it's light out. Sever the spinal cord here and death is anywhere from tenths-of-seconds to-seconds.

Get in the habit of mentally visualizing an attacker inside of an elevator and launching an quick barrage attack upon you. Or trying to shove you into the back of a van. Oh I get it. You are thinking this part is for the women...cause you know...rapists. True enough. But at some point Bob Levinson, Daniel Pearl, Paul Chandler and only a few other hundred thousand men through out history have been forced into captivity. This isn't a “please come with us kind of thing” it's an shit kicking assault until submission happens kind of thing...and that is just the kidnapping.
Not long back in Boston, a guy was riding a subway with his toddler son. He told the boy to wait “over there” pulled a claw hammer out of his back pack and began slamming a complete stranger while yelling “Allah Akbar!” ...and no I'm not kidding. The man he attacked could have fought back with a knife and won.
In India, where everyone from the West who practices yoga sees this as a “spiritual place”, I stopped an assault that occurred inside of vehicle with a CRKT Hissatsu fixed blade.
The Virginia Tech Massacre, where guns weren't allowed on campus, could have ended in short order if someone with balls and a blade would have chin grabbed the son of bitch and cut his throat.
And that is the reality. It is an incredibly scary prospect for many to step INTO a fight with a knife and kill the bad guy. Some people are cowardly by nature, they have water where there should be blood. Can't fight because they're afraid to fight, afraid to fire, afraid to stab, afraid to resist.

And then there are others who don't fight because they can't think beyond the pistol. If this is you I suggest you stop and reorganize. Because there may come that day where you are vacationing somewhere where your conceal carry permit is broken and as you look out over a beautiful chasm from a suspension bridge taking in the view with your family the guy next to you decides he want to throw people off it...just because.

The end game is this. There is a difference between "feeling safe" and having viable options to safely defend oneself.
We don't talk, train, and fight out of a sense of hatred. We do these things out of love. The love to get home, to see our children raised, our families thriving as a whole. I don't “hate” anyone who is trying to do me harm. But they sure in hell are my enemy and I intend on seeing them dead first if it comes to that. I've come home beaten, bruised, battered, rattled, torn, cut, bit and burned...but I've come home.
I expect the same of you.
The Right to Knife Part II coming soon.
at December 13, 2011