A few years back I decided to scale back my armament when I traveled by Air on "low risk" jobs by leaving my 1911 at home and, picked up a second snub nosed revolver instead. The folks over at NRA's Shooting Illustrated let me put my thoughts to pen.

The "Best" a man can get 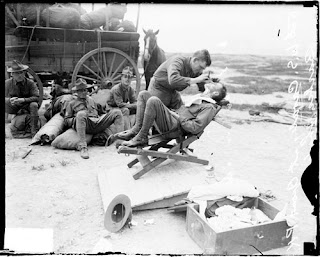 What I find curious about the Gillette Razor commercial in it's tackling "toxic masculinity" of which it does in the most beta of male way ever, is that if a company ever decided to run an ad going after "bitch culture", their headquarters would literally be burnt to the ground.

Masculinity is not toxic. It is not. Is there such a thing as "toxic masculinity"? I think there is. Men just tend to shorten the phraseology and, we coined a term eons ago for this type of behavioral patterns in some human males.


We call them assholes.

Perhaps, just perhaps, society as a whole, be individually invested in the ideas of; humility, personal responsibility, personal freedom, manners, eating at the table, pursuing the family, creating stable environments not just for kids, but for men and women. As a man, there is nothing "toxic" about my masculinity. It is something that I absolutely love and embrace. Somewhere along the way there became this perverse idea from worthless men and hateful women the false-notion that a man is not gentle, nor loving. Incapable of care towards his wife, his child, his planet, his fellow human.

I love being a man. Perhaps that is what most confused me as an adult. As a kid, I always looked forward to manhood only to discover when I finally got here all I found was people trying to reject adulthood. Telling me how wonderful the childhood I just left was and, how they wanted to be a child again.

The idea that childhood is this wonderful and, idyllic place is moronic. I had a wonderful childhood by and large, but it was also an very uncontrolled environment in the sense of my own voice. I had no say, not really.

Dealing with life issues was like trying to peer into the jet black night of this thing called "the future".

As a man I have led, and followed. I have held the ability to traverse the world, stand up for what is right, to push back against evil in my own way. Something I could never do as a child.

I enjoy adulthood. It's not like I'm perfect at it nor, is my attitude or demeanor, every damn day but, I reject the idea that because some people, who are insecure in their own minds and, their worlds see being a man as something that is "toxic" or "evil".

You may note the fact that I don't use the term "dangerous" or "non-violent" in that relation to "toxic masculinity". Because I am in fact both dangerous if need be and, can exercise the prettiest little bout of violence against a bad men should the occasion arise.

Dangerous nor violent do not equate evil.

Neither does being a man.

I owe no one an apology for who I am, and I don't need to be "educated" by a razor company.