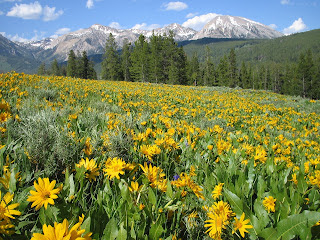 So its July 20th, 2007 here in the Mid-West and normally the weather is something to the effect of 175 degrees with 225% humidity and everyone is generally willing to offer virginal sacrifices to the air conditioner gods to keep the appeased, yet every summer we are seeing milder and milder summers here in this part of the country. Sure we still get those stupid hot days, but something is changing.

As of this writing (around noon non the less) the Temp is 75 degrees and we have been experiencing something of Monsoons in the late afternoons a couple times a week and nice enjoyable days....in July.....in St. Louis.

Global warming is being blamed or at least man is for causing global warming. Well I think we bear some burdens but not all of it. Here is just a thought for all you atheistic evolutionaries to ponder.

The ice caps are a result of meteor impacts that caused something to the effect of a nuclear winter over the earth (read: ice age). Areas that were once comparable to African Savannas year round (Montana) were blanketed by ice and snow and glaciers. So the ice age wasn't exactly something that was supposed to occur naturally in an earth context. Eventually the ice melted over some period of time and the land got itself back in sync. Then we show up and eventually screw the pooch. Or are we completely, I mean we definitely pollute that undebateable.

If the polar caps weren't natural and occurred from galactic pollution and they are still melting then isn't the earth actually returning to what is once was? Maybe we need to realize that in the 21st century that as a society we are completely removed from a daily life amongst the natural land and maybe just maybe we don't have all the answers like we think we do. I seriously doubt that people who drive Priuses and live in urban areas can tell me jack shit about what really goes on in the wilds as a whole...not that they won't try...as they drink water out of the plastic one use bottle that came from petroleum that was drilled out of the earth from several thousand miles away and shipped over an already environmentally troubled ocean, along with those non bio degradable shoes (leather is bio degradable by the way...see circle of life concept).

Everyone talks about the massive droughts in the Southwest and Los Angles areas (umm its the desert) and massive floods every where else and how man has caused all this. Droughts have been going on since before we all were born, by something like since the beginning. It can not rain extensively in one area to the effect of flooding and not cause a drought in another (See Newton's 3rd law of physics it pretty much applies). Our water is the same water that was drunk by earliest man, dinosaurs, Genghis Khan, Caesar, George Washington, to yours truly.

Maybe the reason the earth is shaped in a near perfect circle is because cycles work better that way (hmmm circle-cycle seems to be some connection there), and maybe we all need to stop, look and listen to the natural world instead of trying to talk it to death.

Or here is a really crazy thought. Perhaps there is actually a higher power, an honest Supreme Being who created all this and might have a better handle on things than we all realize.

So if a mid afternoon in July is clear skies and 75 degrees is the result of Global Warming I'm gonna go rejoice and roll around in the nearest land fill then pick up my AK and go Whale Hunting.
at July 20, 2007