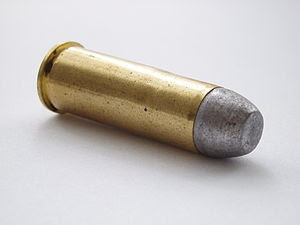 You might not know this but in the Missouri State Senate they are debating a bill on encoding ammunition by 2009. Encoded ammo would be registered to the purchaser and would include the date it was sold, the purchaser's name, date of birth, drivers license number and serial number of ammunition.
I was all set to do my usual ramble about tyranny of government of this when I got a copy of my good friend Dave's e-mail he sent out to our state senators. His words do far more justice than anything I could write. I encourage you to read it.

"I am writing to express my opposition to Senate Bill No. 1200 introduced by Senator Bray. I believe this to be yet another thinly veiled attempt at criminalizing law abiding citizens rather than actually reducing crime. Many law abiding citizens will purchase firearms and ammunition for protection of their homes, persons and property. Sadly, many of these citizens will rarely, if ever, practice with their firearm. Ammunition that has been purchased for self defense purposes may remain in a closet or drawer for years. By passing this law, you have effectively made these law abiding citizens criminals by possessing ammunition which does not meet the requirements set forth in this bill. I find this legislation interesting in that ammunition encoding systems are currently based on a proprietary system, and is patent pending. A licensing fee would be charged for each bullet manufactured with the encoding. I find it reprehensible that a company would enlist the help of legislators to enact legislation that would pump money into their pockets by forcing the licensing of an unproven technology. In addition to the "licensing fee", costs would also be passed on to the consumer to account for the record keeping required for every box of ammo purchased. This will in effect price the Second Amendment out of reach for many law abiding citizens. After all, what good is the right to keep and bear arms if you can't afford the ammunition. The economic impact could be great. If ammunition costs rise significantly, you could potentially see a drop in hunting and shooting sports which pump billions of dollars into our economy. This will result in the closure of manufacturing plants and supporting businesses which require a healthy industry to survive. This would result in the loss of thousands of American jobs. I would think it to be politically damning if legislation were passed which caused the loss of more American jobs. The shutdown of these ammunition manufacturers would impact law enforcement. It could increase their training costs as it would likely impact the availability and quality of the ammunition that they train with and rely upon in their duty weapons. In addition to the impact on law enforcement, our military would be impacted as much of their ammunition also comes from the same factories and manufacturers which produce ammo for civilian and law enforcement use. People who intend to perpetrate a crime with a firearm will have little regard for whether their ammunition is registered or not. If this law were in effect today, it would not have stopped many of the recent mass shootings. Is this legislation about preventing crime, or about filling the coffers of a company peddling an unproven technology and reducing the rights of American citizens through a de facto ban of our Second Amendment rights? I urge you to vote against this measure and any other measure, de facto or de jure, that would infringe or remove the rights granted in the Second Amendment of the Constitution. I would point out that in Australia and The United Kingdom (both with stringent weapons laws) that it has done little to reduce the amount of gun related crime. Rather, in Australia where all forms of firearms are prohibited, crime has actually increased since there is no apparent deterrent in that someone may well be armed. Please vote against this bill."