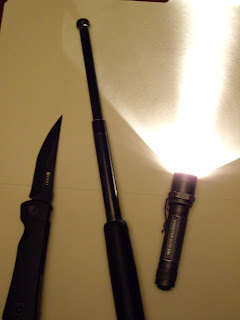 As somewhat previously stated the additional advantage of the ASP is that is can go where firearms can not. A couple years ago I escorted a client over seas into Dubai, then Pakistan, followed by India. Our initial plan was to stay in Karachi for a week and I had begun talking with their Embassy in Chicago in regards to obtaining a permit to carry a firearm. Then I discovered that India wouldn't allow me to come in country with anything larger than a .380 (guess who didn't have a .380 then but does now), and the paper work for India should have been started six months earlier I was informed.

The situation then changed again we would only be in Pakistan for 24 hours before going into India. In a week I went from planning on carrying two handgun to no handguns and was left with few options.

So I went with a 21 inch (extended) ASP Airweight and a 7 inch fixed blade fight knife,a CRKT Hissatsu in desert tan.

Why desert tan and not black? Two reasons. The first: if you are going to find yourself wearing a lot of khakis, white shirts, tan shirts, blue shirts, a tan handled knife blends in better over black.

The second: bought of e-bay I saved $40.00 dollars because everyone wanted black and no one wanted a light brown knife.

We flew out of JFK in New York, bags x-rayed no issues (fly out of NY sometime with a gun :P good times), x-ray and screening through Abu Dubai customs, no problem...I'll cut to the chase I flew internationally for three weeks and multiple times inside India and never once had an issue.

To be honest when I carried the knife and the baton was I legal?

Nope.Not once that I could decipher.

But I have learned one thing about security check points and x-ray machines if you want to get something through. Overwhelm the poor bastard whose job it is to watch the monitor. The only trouble I had with the x-ray machine attendant was the morning we flew out of Karachi and the city was on high alert as Islamabad airport had been bombed about an hour before.
What caught the attention of the man behind the machine? My walkie talkies and the wires wrapped around them. Once the pucker factor went down and we pulled out the radios for hand inspection they were repacked and off we went.

What I'm getting at, is there may come a point in time when you have to weigh the options of being in a dangerous place and providing some measure of protection for yourself or others and NOT have the law in your favor. And even the smallest pistol isn't an option.

You want to really learn how to carry with discretion and go unnoticed (and this is not advice so don't send nasty letters from Rikers Island) find yourself in a position where you have to chose to be legal or right.

Should the situation you're in deteriorate to the point of fighting things like ASPs and knives hold several distinct advantages over guns. No serial numbers that are attached to registration papers someplace. No bullet with rifle marks left behind, nor gun shot residue. Neither requires being reloaded.

They are also highly advantageous with one in each hand against multiple assailants. The concept isn't new at all. The mountain men learned to carry a knife or tomahawk combined with a skull cracker like their Indian counterparts. Go watch Michael Mann's Last of the Mohican's and then look up Subway attacks on youtube.

You will find times aren't any more violent the people have only changed.

Again I'm not advocating anything here. But we live in a mean and nasty world where evil hunts and stalks and doesn't play buy the rules because there are none anyway.

ASPs come in four lengths and two weights. Standard and the Airweight which is 40% lighter and a nice option to have especially if you are going to carry a pistol and reloads.

Personally the 16 & 21 inch models carry a bit more readily on the body. The 31 inch is more styled for riot cops.

If you're an outside the box thinker, that 31 inch model can have a grip cap put on and the shaft painted brown and suddenly you've got this short looking walking cane.

Traveling into unfriendly places that say no guns and have a couple of security "conscious" buddies going along or you just like packing spares of everything? Pack two or three of the 16 or 21 (ooor 26 inch) models together wrap them with rubber bands and pack them with the camera equipment and gosh darn it if they just don't look like a tripod.

Or so I've heard.

No nasty letters or asking for bail money or money for F. Lee Bailey you are responsible for you (hippies included).
at June 26, 2009