Why it does not matter 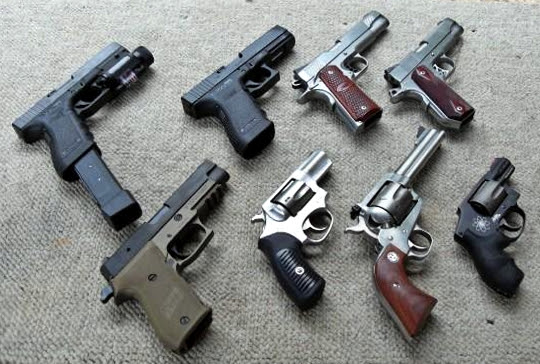 I got in a conversation last night with a couple of guys. The guy I didn't know had just bought a mid-size Glock .40. The guy I knew said Glock's were waaaay over rated and he wouldn't own one. At the time he said this I was handling the new Glock. I looked at him and said "really?" feigning stupification. He gave a smug "ppppf yeah."

So I asked if I could shoot him with it.

I mean if its a waaay over rated gun it shouldn't hurt him then right.

A year or so ago a younger buddy of mine decided to purchase his first handgun. He decidedly said he needed an H&K USP compact. When I asked him why he said "that's what Jack Bauer carries."

Now the funny thing is alot of us roll our eyes, but we have to give anti-gun hollywood some credit to selling guns. One of my first guns lusts ever was the Beretta 92. Because in the 1980s this was the gun of Martin Riggs and John McClain (Lethal Weapon and Die Hard). Elmer Keith may have been responsible for inventing the .44 Magnum but it took Clint Eastwood to put the Model 29 on back order in the 1970s.

But back to my young friend.

He ended up with a Beretta PX4 Storm in 9mm. He was very fond of the gun until one day he mentioned owning a gun to a co-worker who was not a gun owner. They asked what did have and he said "a 9mm Beretta.", an unimpressed "oh" was the response.

Suddenly he was concerned he bought a bad gun. I laughed said he bought a fine one and Lead Chucker and I even got him to an IDPA qualifier.

Jeff Cooper who was a supremely wise man cut a lot of influence in my teenage years and I was gonna be a 1911 man, and I am. But only to a point as previous posts indicate. Cooper despised what he called the Crunchenticker pistols (ala DA/SA), and later on said the Glock was "ok" but no serious pistolero would really carry one.

H&K, Glock, Smith,SiG, Beretta, Kimber, Para, Colt none of it matters.I've grown weary the supposed arguement, especially by those whom qualifications are probably questionable to have the opinion of what is the "best" gun.

LeadChucker went to a good one or two day training course a year or so ago and learned alot. But the instructor told how SiGs were shitty guns and that Glock was the only way to go. Chucker's a smart guy and is able to disimilate on useful and nonuseful information. But frankly that kind of instruction raises my hackles.

The first time I needed a gun to save my life from a stabbing (and now reflecting back I wonder seriously about a rape) was while out hiking when I was about 18. He had a cheap survival knife, I had a cap and ball (and primed) .36 revolver.

He didn't scoff at the fact the gun's design was 130 years old, and I was thankful that black powder handguns were legal for minors to have in Missouri. And I still am thankful to that little gun in the back of my safe.

Never ever apologize for the gun you have. I think you should buy great quality no doubt.... if you can.

So what DOES matter.

Well for starters, it should go bang every time. If it doesn't find out why.95% of the time when semi-autos jam someone says "bad gun". Bullshit. Bad magazine spring, after that, it's probably grit. Or in need of a new recoil spring. Yeah even non 1911 shooters eventually have to replace them if you shoot enough.

It should be accurate. Accurate as in, if you put it in a Ransom Rest and fired it at 25 yards all the holes in the paper would fit inside the facial area of a target. After that its up to you.

And last but not least, buy what appeals to you. If that means squirreling away a little cash for a little longer so be it. You won't wake up the next morning a more well endowed or less endowed in your maleness (if your male) because of your purchase. If you're a gal it will make you a little more sexier regardless of what you bought.