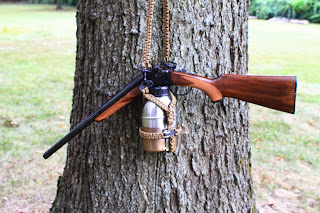 A Client once told me that I have a maddening level of patience. Which I don't necessarily think is true but, you spend enough time in the back of a SUV running surveillance or waiting for hours on end standing behind a Client at a blackjack table in Vegas you learn the fine art of being.

Back in late Spring, the folks over at Dave Canterbury's Pathfinder Store sent me one of their complete Canteen Cooking sets, asking to give it a test and see what I thought. I am relatively certain it was a bit maddening for them in this sense of immediacy world we live in. Because, most gear reviews I've seen are largely based on the unboxing of a new piece of gear and saying "I'll probably use it for .....". I like being able to write that I've you know...used it. 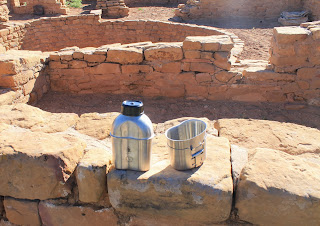 Ironically enough last October when I was in the desert of the U.S./Mexican border running a surveillance operation I thought alot about water. And I was kind of surprised no one had really brought out a steel wide mouthed canteen in the last few years (if they have I didn't know it) given the popularity of steel bottles out. One of the reasons I've always liked a canteen over a water bottle is that a portion of it is flattened and curved to ride on a hip, or in a leg of cargo pant. It doesn't sound like much but if you've ever packed a water bottle around in the field after a while it kind of digs into you. Atleast it does me, when not carried inside a bag.

Funny enough when the canteen kit showed up I was packing for an out of state operation and would be flying out the next morning. I learned the hard way about not packing my own water on a flights and it only took one time. I sat on the tarmac for four hours in Central America dying of thirst and just wanting to be home. Yeah I know you can't cross the TSA checkpoints with water but since I usually hit the airport cafe to fill up my thermos, most of the time the girl behind the counter will fill my water bottle as well (for the sake of clarity I didn't pack the stove portion of the kit on that trip).

Generally speaking, my EDC bag is a filson field bag which does not take long to fill up with assorted gear, especially when traveling. So when I departed the next morning I slid the canteen into the back envelope pocket of the bag (the part that rides against my hip) and it was indeed far more comfortable than a completely rounded water bottle that is often toted there. 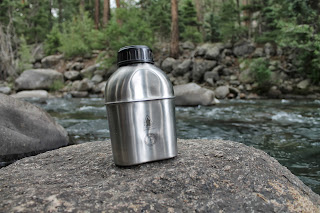 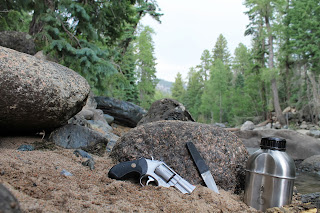 Part of the reason I like the idea of the wide mouth canteen (although a bottle neck fits my nose better) is a few reasons. For starters the bottles dry out better after washing. Somehow with the bottle necks not matter what there is always some small rivulet of water in the bottom, which can mildew or rust. Second in a true wilderness scenario you can run a debris filter (read: bandana) better around a wide mouth and have it fill up quicker. It may sound dumb but, stand in a few icy mountain creeks and streams trying to get deep enough to fill up your water bottle in one fail swoop and you want in and out PDQ. Lastly if you wanted or rather needed to use it as a cook/coffee pot it is going to be easier to put ingredients in, get them out and clean them out.Say for instance you were heading out in the field one morning to hunt or hike and wanted to pack some homemade soup. With the kit already to go you can pack the soup in the canteen, heat it up on the stove and eat it out of the cup. Depending on your heartiness level there would be more than enough for two people. Kitchen on the hip. I did something similar with the outfit and cold brew coffee.

A week after my return, the Wife, Daughter, Dog and some friends loaded up the family SUVs and made out for the Rockies. I had planned on giving the stove a thorough run through in the mountains. Unfortunately they had this slight wild fire across the state of Colorado (you may have heard about it), so for our region of the state no fires were permitted.

Interestingly enough I found an unconventional use for the stove at one point when the Wife bought some fruit and needing to wash it I simply inverted it and used it as a colander.

At one point when we went for a hike and packed the Dog's pack (yes she has her own pack) I put the canteen kit to use for her (yes I have other water bottles). Again the flat side of the canteen was able to ride comfortable against her side, and when there was no creek for her to drink out of the stainless cup was immediately available as a water bowl on the go.

Now for the record, I see you over there, arms crossed thinking "$60 bucks for the dog to use it as a watering bowl ?". You and I both know it's not it's sole purpose but, rather one of many uses. 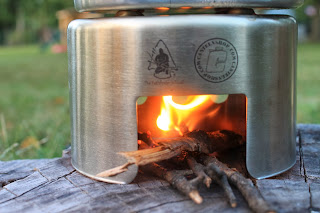 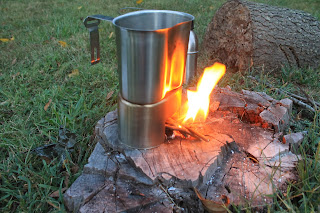 When I did get a chance to use the stove... you know as a stove it did work very well. Good draft drawn through it, heated soups and boiled water readily in both the canteen and the companion cup. It works best with small twigs from toothpick to big toe size and with seasoned hard wood especially. You can use fuel tabs as well but I found natural material to work better, which there is something to be said for that. Last year's foray on the border had me packing my Jetboil stove that goes on the majority of jobs. Since I flew out I had to leave the fuel canister(s) at home and purchase that part of the kit when I got to my destination. Which I did. Except that I didn't. The canister's I picked up at a local (and about ready to close) sporting goods store looked like they would work, the gal said they would work and it turned out they were not threaded and in short did not work for the Jetboil. Of course this wasn't realized until two days and far more removed from the citizenry. Hence having a secondary stove that took up essentially no additional space than that of my canteen would have been nice. 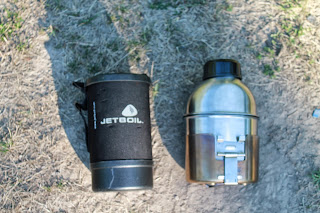 And while on the subject of the kit's stove it bears mentioning that while no doubt the intentional selling point is to be seen as a single stove/cooking unit I found it the most useful as a companion stove to my jet boil essentially giving me two compact burners for cooking multiple parts to an outdoor meal. When a nice collection of coals are burning inside the stainless steel stove it works very well in maintaining a cup of coffee hot in the wide mouthed steel companion cup, which by it's very nature is going to cool off relatively quick otherwise.

If you were to really be in a pinch and need the stove for solitary and purposeful use, a few branches snapped down to the length of your forearm are going to go a long way in feeding the fire. If you were for one reason or another keeping a low profile the little stove helps keep your flame's signature to a minimum.

Since it arrived in the warm season I do have one idea I'm wanting to try out, and that is, from a bush-crafting angle, of using it as a wooden stove to warm myself around. As a kid I read an Indian trick where in the bitterness of winter and while on the hunt, the Cherokee would dig a small hole in the ground, build a fire in it and the wrap themselves in their robes around it. IF done carefully I think this could work well and in a survival situation could prevent hypothermia while preventing direct exposure to flames.

From a general use/ everyday water carrier it of course works quite well. I did make one mental note that certainly was advantageous. On one out of town surveillance job were I was using a rental car, as opposed to home where I have my Duluth bag riding shotgun, the canteen was in the seat next to me and didn't do want water bottles normally do....roll. Specifically off the seat and into the far corner of the passenger's side floor.

Though it probably won't see this kind of singular use by me I could see it being stowed in a bug out bag with a small fire log for fuel purposes.

As far as how much it all holds, the liquid measurement of the canteen is around 42 ounces and the cup (which has measuring gradients inside) holds 25 ounces or 700 ML.

Finally, I get it. Somebody out there is thinking back to the surplus steel kits that already had all of this at a fraction of the price. And nobody is denying it. But most of that gear was also aluminum not stainless steel and between the two I would prefer the later over the former. And to answer that hand raised out there...I tried it and no the old surplus gear doesn't fit with the new kit. In other words if you are thinking you'll buy the canteen then hit your surplus outfitter up for the stove and cup, they won't nestle together.

The couple of criticism I do have is that the inside of the cap gets a weird campfire smoke smell to it, but when I inquired about this to the folks at US Canteen, they were aware of it and it was in the process of being corrected. Frankly I would have like to have also see the lid and the mouth threads on the canteen built around the same specs as the Pathfinder water bottle and Kleen Kanteen. Uniformity has it's place after all. When I asked about this as well I was told that they simply were using a different manufacturer on the canteen and the specs were just different.

While the kit may cost $60 I can tell you if you are even reasonable responsible with your gear you'll pass it down to your kids one day. Whether you are reading this at thirty-nine or nine. When you start seeing some of your gear enter it's third decade (or more), sixty bucks over that amount of time is a bargain.

Is everybody going to rush out and buy one?

But for those who see it's good use potential in their life, or someone else's I think you'll be happy with it.

The following link does illustrate the fact that, despite what some people think, you can still go missing into the wild of the lower 48 and not be found for some time, let alone alive. It makes good sense to have a way to keep your water purified in such a situation because you would want to have to fight a stomach bug on top of everything else.

And sorry it's a CNN link.