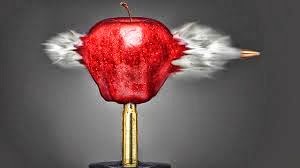 I came across this quote today.

"While there is some concern of overpenetration with a handgun cartridge, your primary concern should be that your defensive round of choice will have sufficient penetration to reach vital organs and cause incapacitating blood loss in an attacker."

On the surface the statement is clearly logical enough, provided we remove one aspect of it.

Your primary concern is to make sure that what you are seeing is in fact accurate, ala use exemplary judgement.

And I mean it. THAT is your primary concern.

"Hold on a minute" you're thinking.

"If I'm startled from my sleep in the middle of the night to someone breaking into my house I need to win that fight short and quick.".

Of which I would concur with you. However, you still need to confirm that what you believe to be happening is in fact happening. Don't misinterpret what I am saying, you can in most instances come to the conclussion that you need to apply the lethal use of force very very quickly. In some cases a mere blink of an eye.

However, time and time again we allow preconceived scenarios other people have laid out for us to become our future predictors. There is a distinct difference between sitting at a red light and seeing pistol pressed against the driver's side window and, sitting in an outdoor cafe somewhere and hearing gun fire, followed by a guy with a handgun running in your direction.

Gun does not always equal threat.

Clearly in the millisecond it takes to recognize a gun at the car window you understand what is happening and can justifiable respond in unkind fashion.

Judgement, in other words, of that situation was rendered most ricky-tick. But, if we revisit our cafe scene where we see a lone gunman running in our direction the "primary" concern here would be to either get behind something that conceals or covers (preferably both) in order to buy more time to make a judgement call, while drawing our handgun to make ready for a fight.

Because what if, in your quick-to-judge-and-shoot mindset you see the man, see the gun, draw your own handgun, aim, fire and kill, a man who in all reality was up until a few minutes ago doing exactly the same thing as you were. And instead of being a "lone gunman" was instead running point with his wife and children in single file tow behind him.

As you turn pasty and palms sweaty at the thought of killing a fellow conceal carrier/good guy we can also examine the situation from the polar opposite angle. Where we see everything going on as mentioned before, sitting in a cafe, hearing shots, seeing a man run towards you and suddenly begins firing random shots, or aims his gun at you (remember that part about cover and concealment). It does not take very long to determine who the bad-guy-in-question is here.

It may also be seeking cover for any loved ones who are with you before ultimately deciding to engage in a shoot out. Because let's be precise about this. That is exactly what you are doing. Shooting it out.

The target range it ain't.

Even then, sufficient penetration of ammunition fired into an aggressor is not even tertiary in the level of importance. Knowing what is beyond your target is.

"In my world a person wounded by a shoot through round is considered collateral damage." cries the internet Tier one operator.

It is certainly cavalier to think you would not be effected on many levels if your shot went through the bad-guy-in-question and spined a six year old boy or nicked the liver of a mom out for a day of shopping with her daughters only to bleed out in front of them from the bullet you fired.

"are you saying I have to wait for a clear shot while this tango has a target rich environment?"

If left with the choice between accuracy and penetration I will choose accuracy every time.

Can you have both?

Certainly. As a matter of fact we live in the golden age of ammunition. Great accuracy that performs with superb results. But it bears mentioning that if you do not apply repetitive training and "what if" role playing in your head (which aids in those sense-of-immediacy-judgement-calls), to your life then what you may find is that you have poorly delivered shot placement with superb results on an unintended human being.

You want the best ammunition available, that will deliver destructive results WITH sufficient penetration. However it is not, amongst your gun carrying days the "primary concern". The fight is going to be what it is going to be, not what you want it to be.

Our rights to bear arms does not come with a permission to maim. When I carry a firearm amongst the populace, which is daily and for hours and hours at a time I take into consideration that I want all of the good guys to go home after any fracas that may find me involved in it. I would hope you would as well.