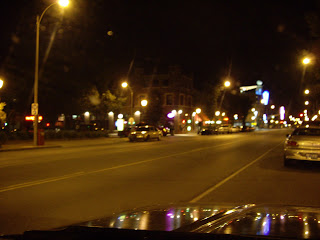 In the Self-defense community there tends to be two unofficial schools of thought. That an individual should either avoid or non-verbally deter a situation before it starts or go straight to a full bore gun fight. We tend not to talk about the weird middle ground where walking away may get you attacked and the situation doesn't constitute the drawing of a firearm on your part. I suspect this lack of discussion stems from one of two points of instruction.

One is the police officer who also teaches CCW classes on the side. Typically he/she is use to large amounts of conflict and confrontation on the job. Yet they bear one distinct advantage over the civilian. They have the law on their side automatically, and they have the benefit of rolling back up. Understand this is not a side glancing judgment on my part, rather a police officer's confrontation with an unruly-to-violent individual ends in the arrest. Rarely can a miscreant confront a police officer in a highly aggressive manner and not end up in the back of a squad car.

Meaning: both parties are not mutually deterred by the other.

The flip side of the coin is a civilian instructor who may work in the firearms industry at a local store and is an avid gun enthusiast.More than likely his/her experiences with hackle raising situations-to-confrontation-to gunfight/shooting is either rare or non-existent. This is not about their experiences being inferior, just different.

Focus too much on gun-on-gun resolution we take a valuable tool out of the tool box, our verbal skills and a calm demeanor. If you can't be verbally calm and mentally collected in a verbal altercation, I promise you, you are not going to shine on through when it comes to a gunfight.

Having to engage against a verbally aggressive person who for all appearances is not physically violent requires being smart on your part. One be polite and two be firm. These two are separate but equal. Being polite in a verbal confrontation isn't you being a coward. Rather quite the opposite. The capability to remain polite, unapologetic and firm shows who is in control of the situation.

Being rude or insulting doesn't show that you are strong, it simply points out your lack of decency, capability or both (i.e. you are an asshole just like the other guy). Likewise its not appropriate to be "nice" either. Being nice and apologetic in a bad situation says that you are soft. This is just as unsteady as being rude, and unnecessarily aggressive.

If your BIQ (bad guy in question) is screaming and yelling at you and you respond in kind you just lost all tactical placement in controlling the situation. Because now you have no other levels on the scale to go. Once you're in a screaming match and throwing around threats, YOU either have to get physical or run. And frankly if you're screaming and yelling too. It's your fault.

Conversely being too nice you set yourself up on losing ground mentally. Start off apologizing and backing down trying to de-escalate the situation by blaming yourself appears weak or unprepared and left racing to find the appropriate level of response.

Think Cooper's Condition Colors. Its the verbal equivalent of white and red with no yellow. If you're a hot head and can't control your temper you're likely the same guy who flashes his pistol during rush hour when he gets cut off (yeah its rare...and yeah it does happen). Yet the person who has no self-respect AND a CCW permit will forever doubt themselves of whether or not its the right time to engage unless someone else starts the shooting first.

For a number of years I had the benefit of protecting a very wealthy bachelor who enjoyed night clubs and bars and was always surrounded by beautiful women. At some point an intoxicated individual or a few of them would inevitable decide they resented my Principal's presence and his ability to “take up all the girls”. Some protection agents can go their whole careers and can count on one hand the number of verbal altercations they've had. I could expect several a week.

I had to remain professional and confident and not lose my temper. The same applies to you.

If we look at what causes our tempers to flare it is generally the result of taking something personal. Some cases its perfectly justified, but on the street it's not.

Ask yourself this. Does the overly verbal BIQ actually know you?

If some one calls you “a mother fucker.” You need to realize that in this day and age its more slang than insult, but are you? If you are not then its rather a moot point. If you are then he's right and you need to seek help.

Once early on in my career a very disgruntled individual was yelling some things at a Principal of mine as we walked out of a very nice restaurant (money does not equal class by the way). I maintained my vigilance throughout the situation until she said “fuck you and your fag bodyguard”. My temper flared. I didn't react in anyway other than a nasty look, but a couple of minutes later as we drove off in the Suburban I realized that it was meant for shock value and response, nothing more.

Don't get lured in by words.

Some people go around looking for a fight and they look for non verbal indicators from everyone else to see who to select. Its that simple. Sometimes you get picked, not because you look weak, in fact it may be because you look like a challenge.

If they start it, you end it, but be smart about it. Stay steady in your pitch of voice, maintain eye contact, watch the hands, and say things to them like “Sir”.

In a potentially violent situation don't ask them to do anything. Instruct them.

Don't make open ended statements like “this is the last time I'm telling you.....”. Because then you are faced with what to do when they do, whatever it was they were doing, again.

Don't fall into saying “I will kick-your-ass.” instead respond with a calm toned “do you have five grand for bail money?”

Once with the aforementioned Principal we were in a bar and a intoxicated individual was mouthing off and eventually walked over to our area. I placed myself between him and my Principal, the BIQ a little over arms length away. His threatening tone was blather but that didn't mean he could be ignored. I noticed a knife clip sticking out of his pocket and said “Is that a Benchmade?”, he gave me this cross-eyed look for a second and I continued with “yeah yeah yeah it is, I carry an Elishewitz Stryker myself”. The man stumbled over his words for a second and I said to the bar maid “hey get this guy a beer” then turned around and said “Seriously, nice blade man. Hey gotta get back to work though. Take it easy.” He beemed and said thanks went back over to his buddies and there was no more problems.

For $2.75 I avoided a physical altercation, police reports, and a potentially liable situation for myself and my Principal.

My client's friend, an out of town executive told me later that I handled that very smooth I simply said that I get lots of practice. And I still do.

I get it in the car, in the shower, waiting in line. It's called "the What If" game. I constantly look at situations around me and think "if this individual responds this way I will in turn do this." I then think of any other scenario that could happen and problem solve may way through. Everything from an irate person in front of me to multiple gunmen walking in.

Instead of practicing some witty remark to say if you ever have to pull your gun, work on what to say in order to prevent it.

Think it through and break your statements down. Are they feasible? too long an tongue tying? inflammatory?

Its not about memorizing the right thing to say, its about practice. Just like going to the range.

Practice serves to make you familiar with what you are doing and to build muscle memory so you know the appropriate response, and...to build confidence. Bad guys don't wear t-shirts with bulls-eyes on them, that we all know. However it's nice to know that you can put a magazine or two through an ever increasingly ragged hole at the range.

People watch. When two people interact poorly and you witness it, think how you would have reacted initially, then stop think it over and think how you could have desolved it. Maybe it's by ignoring them all together, or maybe its by responding firmly and calmly.

Why is this so important. Because you may face a guy who is unarmed while you are carrying and he may be willing and very capable in hand to hand fighting where you are not. And you not being capable in that arena doesn't necessarily mean you have the right to lethal force.

Play the what if game, study your appropriate level of verbal response anywhere. Given that people are people you certainly won't lack opportunity.
at August 23, 2009