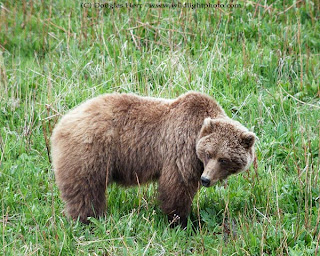 A quick update from last year's post (45 ACP Big Bear Medicince ?) . In it I mentioned that a man and woman were hiking in Denali National Park when the woman was charged by a Grizzly that was shot and killed by her male companion armed with a .45 Automatic.

You can read the full article here but here is a quick overview of the situation.


The long and short of it is this. Is the .45 ACP capable of killing a charging bear? Yes.

Most people's first choice? No.

A quick and interesting aspect I found on this website for hunting in British Columbia show the full decomposed remains of a Grizzly. I point to it because you get a good look at the other wise unseen bone structure of these massive bears. Go Here
at May 25, 2011

A lot of the guys I work with have spent extended periods in Alaska at remote sites. They all carried a side arm, MINIMUM 44 magnum, and two carried 454 Casull.
And if they were going to be more than a dozen feet from their vehicle, one of them brought the 12 gauge slug-gun they ALWAYS had in the truck!

I'm not likely to be able to purchase a .44 Mag any time soon, but it sure makes the case to keep that hi-cap .45 around with a mag full of hot Buffalo Bore.

I think when we're camping here in MO, a hotly stoked .45 would be more than adequate (given the rarity of black bears here) But should we ever find ourselves out west, we don't have much of an excuse to not be properly prepared (i.e. slug gun slung on the shoulder).

I can't be the only one who comes late to the party...

The "skeleton" link doesn't work - but I think this is what you meant: http://www.pacificwild.org/site/about/conservation-priorities/trophy-hunting-of-b.c.-grizzly-bears.html